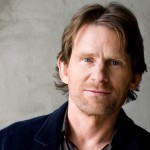 Steven Mackey is a busy guy. In addition to playing the guitar and teaching music at Princeton, he composes some very large scale musical works, like Dreamhouse

, his piece for singer/actor, vocal quartet, electric guitar quartet, and orchestra, which was commissioned for the Holland Festival in 2003.

Mackey found time to chat with me via email recently. We discussed how music can be set to words as well as vice-versa, which movie musical we both love, and what advice he wouldn’t give to a couple of his fellow composers!

MMN: How did you react when you heard that BMOP/sound’s recording of your piece, Dreamhouse

SM: I had gone to bed and my wife saw something online and left a note for me when I woke up. I was convinced that the term “nominated” was like “entered,” and didn’t mean anything. But as the day rolled on and I started getting dozens of congratulatory emails and someone sent me the front page of LA Times art section with my picture, I realized that it was a big deal! Since Dreamhouse was such a long labor of love and the disc was released with so little publicity, no release party even, I was ecstatic when I heard the nomination because I thought, “Maybe someone will listen to this after all!”

MMN: The libretto for Dreamhouse ranges freely between the profound and the mundane (the transition from “Groove” into “Roofmen” is just one example), and the music responds to that in a variety of ways. Can you describe how you approach/think about text-setting? By the way, I recently interviewed Laurie Anderson about her album Homeland

, which has similar juxtapositions. Listening to your CD and hers in close proximity is very trippy! 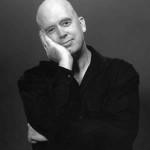 SM: Rinde Eckert and I decided to “co-write” the text so that I could approach text-setting less like the classical paradigm of reverently setting a poem. By having Rinde’s blessing to change words and even write my own stanzas, I could use text as “choreography” for the singer’s mouth. The words become part of the orchestration. If I want a strong attack on a word with a ‘P’ or a ‘T’ I can decide to do it that way. I might decide to double a note with a marimba hit. I wanted to explore the sound of the words as much as the meaning, but not in the deconstructionist sense of, for example, Berio’s Circles. My approach comes more from a pop/rock approach where the words might melt into the music and be mutually dependent.

Also in contrast to the classical text-setting paradigm, as in all my collaborations with Rinde, the music sometimes comes first and the words later. Typically, I might compose a stretch of music and lay out a road map for the kinds of textures I want by telling Rinde that I want calm speaking here, followed by heated speaking, then sung text to a given melody, then vocalise, etc. Rinde will then supply the words that dramatically justify my roadmap. It makes me look like a resourceful text-setter when if fact Rinde is setting music to words. But we also use the old school approach of him writing words and me setting them. The variety of approaches helps engender the variety of surfaces.

MMN: The libretto also includes some terms and phrases that are quite specifically building-related, such as ‘copper flashing’ and ‘remedial drainage crickets.’ Do either you or your co-librettist Rinde Eckert have a background in architecture or construction? Did you do a little research on it while working on the piece?

SM: I was so pleased when Rinde developed the architectural metaphor, because that gave us the opportunity to use language that was deep and symbolic, mundane and also technical. Complicated uncommon words, like Latin, but without immediate emotional associations which leaves more room for music.

Rinde has some hands-on experience with carpentry and such, I was having a lot of home repairs at the time and watching a lot of HGTV. We definitely did some research while working on it. For example, I remember having lunch with an architect and asking him to just lay out some cool words for us.

As I said above, we were particularly interested in those kinds of words because they sound really interesting and unusual, but are not loaded with a lot of emotional meaning on their own, which leaves room for the music to supply the emotion… or not.

MMN: Rinde plays the role of The Architect. What roles do the members of the vocal quartet play, in your vision? Incidentally, there were moments while listening to what the vocal quartet does when I thought, “Swingle Singers on shrooms!” 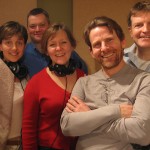 The vocal quartet is mostly the proverbial abstract, commenting, “Greek” chorus, no more theatrical than the guitar quartet. The vocal quartet as a whole has an Apollonian character and the guitars are more Dionysian. But there are also times when singers from the vocal ensemble emerge briefly as characters – the architects client’s – such as the alto solo representing the suburban woman in a grand house with beautiful landscaping gazing at a perfectly still pool and reflecting “How lovely,” but then with no change of affect realizes, “No, I can’t go on.”

MMN: What else would you say about the function of the Catch Electric Guitar Quartet? The easy assumption would be that the quartet represents modernity, noise, chaos, while the orchestra symbolizes tradition or security, and there is some tension between nostalgia/a longing for suburban stability and something more complicated. What was your conception of what the guitars bring to the piece? 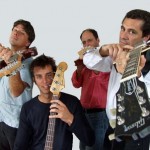 SM: The tension between nostalgic longing for suburban security and the possibility that such security is an illusion was very deliberate. And there is definitely that aspect of noise and chaos for the guitars – as I said above, more Dionysian, in contrast to the more traditional orchestral sounds. The commission came from the Holland Festival, and the request was to write an orchestral piece with a “section of guitars”. For reasons I don’t consciously understand, I requested voices to “balance” the guitars, and the idea of a soloist came last. My inchoate image of what I wanted the piece to be, before I started working, was of all these diverse elements: orchestra, amplified singers, electric guitars, tenor/actor, playing, singing, talking, shouting; true to themselves, sometimes in a glorious cacophony and sometimes with surprising agreement, fusion and sympathy.

MMN: Different moments in the piece conjured different musical associations for me, including opera, musical theatre, prog rock, Renaissance polyphony, and more… and yet you make it all work together. However do you do it?

SM: Thanks! Well I have to say that all those things you mentioned are integral parts of who I am and have been as a musician for the past 40 years. As I’ve said many times, I’m a musical omnivore. It might be important that I never set out to try to mix these things up. I’m not on a mission to mix things up. I am just naturally mixed up at the DNA level. I’m a mutt. It always surprised me a little bit when people comment on the diverse influences because for me, this is just how music goes.

MMN: This is a goofy aside, but I had a very different take on the “Framing” section than Frank J. Oteri, who wrote the CD liner notes. He described it as a “mock Bulgarian women’s chorus;” I heard it as a boisterous music theatre production number. In fact, it reminded me of the song, “Stool Boom,” from the Christopher Guest movie Waiting for Guffman, about the factory that produces footstools. I mean that in the nicest way, I hope it’s clear!

SM: I love, love, love that movie, and all Christopher Guest movies… I totally see that!

MMN: What inspired you to include the Sanctus text from the Latin Mass in the “Roofmen” section?

SM: A couple of things sparked it I think:

MMN: Dreamhouse is scored for a large orchestra and a very specialized group of featured performers: a singer/actor, amplified vocal quartet, and electric guitar quartet. Will it be performed live again?

SM: It has been performed live twice and the third live performance is scheduled for June 11, 2012 in Manchester as part of a celebration to open the new BBC studios in Manchester. I’m conducting… yikes!!! Be there or be square!

MMN: In an interview for New Music Box, you discuss how the music department at Princeton has evolved during your time on the faculty, due in no small part to your own development as a composer. You tell some stories that range from funny to sad about interacting with composers from very different points on the spectrum than you, including some cantankerous grad students. Do ideological divisions still cause tension, or is diversity better tolerated nowadays? Being a composer who has worked in different styles myself, I don’t see why we can’t all just get along!

SM: The past decade has been an amazing golden era in the Princeton Music department. We do all get along – at minimum have a lot of respect for each other, and mostly close friendships as well. Our students represent a lot of diversity. We have folks writing groovy, post-minimal, indie classical. Others are interested in a texture/timbral based euro-modernism. Some identify themselves as sound artists, some laptop composer/performers. The pop/classical dialectic is pretty irrelevant these days around here. Fingers crossed that it stays alive and vibrant for a long time.

MMN: You also mention that your grad students now are more likely to be musically “omnivorous,” to use your term, but that they tend to feel guilty about it, worrying that they’re not “legit.” As an educator, how do you think a good balance can be struck between making sure aspiring composers get the training they need, while encouraging their individuality and reducing this sort of neurosis that can set in?

SM: Just in the past couple of years I definitely notice that students at Princeton do not worry as much as they did about whether they are “allowed” to do something.

The grad students at Princeton tend to already have a good sense of who they are. Competition is stiff to get in and we look for composers who have a clear point of view. As an educator, my philosophy is that composers should lead with their strengths rather than to try to shore up their weakness to a uniform level of mediocrity. I would like to think that I have the good sense NOT to tell Steve Reich, “Nice harmony, Steve, but too much repetition.” Or if Stravinsky came to me – “Igor, you have to learn to write a smooth transition!” On the graduate level, I just try to help students be more vivid versions of themselves. On the undergraduate level, it is completely different. I really try to make sure they have sound basics in counterpoint, orchestration etc. as a way of helping them find out who they are.

MMN: What are you working on now?

SM: I am writing a piano concerto for Orli Shaham, LA Phil, St. Louis Symphony and New Jersey Symphony. I’m nearly done with that. Then I will try to juggle two very different projects at once – a work for the Chamber Orchestra of Philadelphia (it has been awhile since I wrote an orchestra piece that was not a concerto with soloist) and a theatrical work for solo electric guitar (me), 3 female dancers, and video – we are calling it an opera for solo electric guitar. One kind of traditional project and one kind of experimental project… definitely keeps me interested!