On Friday, January 27, the Boston Modern Orchestra Project (a.k.a. BMOP) presented Strange Bedfellows: Unexpected Concertos, showcasing instruments don’t get to be concerto soloists as often as their ubiquitous cousins, like violin or piano. Here, the spotlight was on viola, electric guitar, mandolin, theremin and French horn. All but one of the pieces were written in the last six years, and together they showed that contemporary classical music is thriving — don’t let anyone tell you different!

The program opened with the lone “old” piece of the evening: Chemins II su Sequenza VI by Luciano Berio, written in 1967. The piece takes Berio’s solo viola work, Sequenza VI, and surrounds it with a chamber orchestra. But instead of standard concerto-like things such as solo line with orchestral accompaniment, call and response, or soloist versus orchestra in a valiant battle of virtuosity, here the soloist/orchestra relationship is one of amplification. The orchestra reflects the viola’s frenetic, persistent tremolo, and expands on it, like the rings that radiate out from where a stone drops into water. As I watched violist John Stulz digging into the relentless quadruple stops with athletic intensity, I imagined that the orchestra was providing a soundtrack to the soloist’s fevered dream rather than accompanying him in real life.

Just when I was starting to wish Berio would relieve the violist from his labors and let him sing a bit, the viola line did break out into semi-sustained phraselets while the orchestra continued to fret. Then the piece ended with a doleful unaccompanied cadenza whose weariness was well-earned.

Here is the original solo Sequenza:

And here is the concerto version:

Given the imagery that came to my mind during the Berio, I found it rather uncanny to read the following in the composer Keeril Makan’s notes for his electric guitar concerto, Dream Lightly:

All of the music is derived from or in response to the guitar. It is not a concerto in the traditional sense, as the soloist and the orchestra are not antagonists. Rather it is as if the orchestra exists inside of the guitarist’s head, helping, supporting, and coloring. 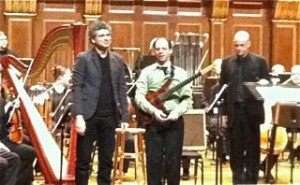 As the composer also states, “the guitarist always plays harmonics. These are notes produced by lighty touching the string at certain points to create sounds that sound higher and more fragile than ordinary pitches.” The effect is icily beautiful during the opening of the piece, which features an interplay between those guitar harmonics, stark high notes in the harp, and single tolls of tubular bells. Later on, the guitar does strum some non-harmonic chords, which are nearly swallowed up by growling in the basses.

I confess that I grew weary of the almost-all-harmonic guitar sound; I wanted to rush the stage and turn up the bass dial on the guitar’s amplifier… but of course I behaved myself! I’m usually not totally convinced by the combination of electric guitar and acoustic instruments; the sounds just don’t gel, somehow. I admired the dreamy soundscape of the piece, though. It also ended with quiet solo cadenza, which seemed just right. 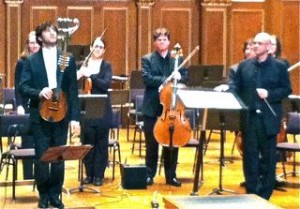 I didn’t expect to be blown away by anything involving the mandolin — the instrument just looks so small and slight and unlikely to hold its own against an orchestra. But I was absolutely charmed by Avner Dorman’s Mandolin Concerto, with soloist Avi Avital. (The mandolin was miked, which evened out the playing field considerably.)

The composer describes the piece as “neo-baroque,” and it was, particularly in the harmonies and textures of the orchestra’s entrance, after the solo opening that established the mandolin as more than a lightweight presence. But neo-baroque was just a jumping-off point. From there, the piece went heavy metal, with thrashing chords, and it inter-cut dreamlike, sustained passages with a cute little waltz that made me expect Roberto Benigni to stagger drunkenly across the stage. At one point the waltz texture was layered between forlorn pizzicati in the lower strings and icy keening in the violins.

I believe that in some more uptight quarters of music nerddom, a piece like this might be labeled a “pastiche,” but to me it was a great ride. The rest of the audience seemed to agree, judging by their enthusiastic ovation. 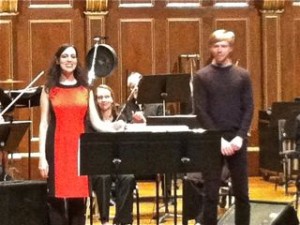 I had particularly looked forward to the theremin piece, as I love the instrument and have written for it myself. Andrew Norman’s Air: for Theremin and Orchestra put it through its paces, and soloist Dalit Warshaw was mesmerizing to watch. (Also, I was envious of her groovy retro colorblock dress.) Though the thereminist doesn’t actually touch her instrument, she must deploy an intense physicality to shape its sounds, especially in the low registers where she has to lean back from the instrument.

In his program notes, the composer describes his attraction to the vocal quality of the theremin: “This is piece that treats the theremin like a hyper-human voice… that can sing lower than the lowest basso profundo and higher than the highest coloratura soprano.” He also notes that the theremin doesn’t need to breathe, giving him the perfect chance to contemplate “long-lined lyricism and its place in the discourse of contemporary classical music.” For students trained in a certain type of modernism, long-lined lyricism can range from anathema to forbidden fruit — it’s a rich topic.

Norman’s piece deftly embodies what he describes as the theremin’s “unlikely yet endearing synthesis of faded Old World nostalgia and Sci-Fi kitch.” Indeed, the cadenza late in the piece was a veritable encyclopedia of sound effect-like figures that broke the fourth wall and made the audience laugh. It bordered on stereotypical, but that’s the kind of thing the theremin cries out for, so it’s pretty hard to resist and easy to forgive. 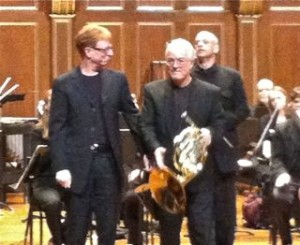 Eric Chasalow’s Horn Concerto contrasted pointillistic textures and jumpy rhythms with long, beautiful tones in the horn. But the horn part never felt as soloistic to me as I wanted it to, even when it was by itself. The horn gets the last word in this piece, in what the program note calls “an introspective recollection of an earlier self.” To me, it seemed to trail off in a way I found unsatisfying. Maybe I was just hoping for another drunken waltz!

BMOP’s next concert, on Friday, April 6, features Tan Dun’s Water Passion after Saint Matthew. Check out their Club Concerts on March 5 and April 30 as well.