Greetings from sunny California, music nerds! I touched down in Los Angeles yesterday, and I’ve been tooling around in my rented Hyundai Sonata – very appropriate, don’t you think?

Tomorrow night I get to attend my first official GRAMMY Week event: “One Night Only: A Celebration Of The Live Music Experience.” If you’re an LA area music nerd, you can attend, too – tickets are still available! The event is part of the GRAMMY Foundation Music Preservation Project, and according to the Foundation, it “will explore the history and evolution of live concert performances and celebrate the various and invaluable contributions of those events, the key players behind them, and their influence on the American cultural landscape. The event will feature live musical performances and archival footage.”

Reading the lineup of live performers, I was excited to see great artists like A Fine Frenzy, Mavis Staples, Robert Cray, Jonny Lang, Shelby Lynne and more, plus co-hosts Sharon Osbourne and Steve Vai. But I was also curious about a group I hadn’t heard of before: the Colburn Orchestra. Did I dare hope there would be classical musicians playing alongside all these great popular stars? I got in touch with the orchestra’s conductor, Yehuda Gilad, to find out. 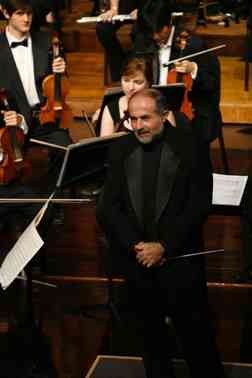 Yehuda Gilad and the Colburn Orchestra

Originally from Israel, Gilad is also a performing clarinetist who teaches clarinet and gives master classes all over the world. He has conducted the orchestra since its inception in 2003, and it is affiliated with the Colburn School, a professional school of music located in downtown Los Angeles, across the street from Disney Hall. They offer a Bachelor of Music, a Professional Studies program, and an Artist’s Diploma. Because accepted student receive full scholarships, competition for acceptance is stiff, and the artistic level is very high. “We have people audition from all over the world,” Gilad told me.

The orchestra members range in age from 18 to 26, but Gilad finds them musically sophisticated beyond their years. “The only thing that differentiates between them and a professional orchestra is that they don’t have gray hair,” he said. ” I always tell the people that come to listen to us, just imagine if I put some white on each of the students’ heads — you’d say, ‘Oh, this is a professional orchestra!'”

How did the group come to be part of tomorrow’s event, I asked? “I guess people heard of us,” he answered. “We perform all over Southern California. Our home is the Ambassador Auditorium in Pasadena, and we perform in Disney Hall, in Royce Hall [at UCLA], in Thousand Oaks. We serve quite a large community. Somebody came to our concert, perhaps, and knew the quality that the Colburn Orchestra musicians have, and they called. I was thrilled to get the call,” he said of this opportunity to bring classical music to a wider GRAMMY-week audience.

I wondered if the orchestra would be accompanying one of the other performers in the show, or playing on their own? Gilad told me that they will open the program with an excerpt from… well, I think I will wait until after the event to reveal it, so I don’t spoil the surprise for any ticket holders out there! Here’s a hint: it’s a much-loved symphony by a European composer with an American connection, so it’s quite fitting for this event.

What does it mean for the young people in the orchestra to perform at an event like this? “They are very much looking forward to it,” Gilad said. “They are excited to share their love of classical music” with fans of other genres. Obviously they wanted to play the whole symphony!” Fortunately, audiences in Southern California will have more opportunities to hear them, and they’ve been in the recording studio this week as well, so soon they should be heard even beyond their local area.

Since the group is preparing to perform for an audience made up of fans of many different genres of music, I asked Gilad for his thoughts on attracting wider audiences for classical music. He mentioned the importance of education from an early age. “You have to partner with the schools to educate [young people], not necessarily to be a professional, but in the ability to appreciate the richness and the depth of classical music. It has to happen from a very early age — four or five or six.” I agree, as I think most classical musicians would.

Another important factor for Gilad is how the musicians demonstrate their love for the music in live performance: “If I go to hear an orchestra, of course I listen very carefully, but I also watch. Otherwise, I could hear it on a disc, right? And when I watch some orchestras, and I see that people almost look like they don’t want to be there, it’s amazing. Why should I pay $100 to go see them? I’m not going to buy a ticket to hear you play if I cannot see that you enjoy playing. We, the musicians on stage, need to act like what the music calls for: you have a beautiful passage, or an ominous passage… You have to see it in the eyes, the movements… When you share it with people visually and auditorily, then the impact is very good.”

I asked him if I could expect the members of the Colburn Orchestra to demonstrate this visual and emotional involvement he looks for? “I’m not going to be the judge of it,” he said, “But I insist on it!”

I’m looking forward to hearing and seeing them tomorrow night!