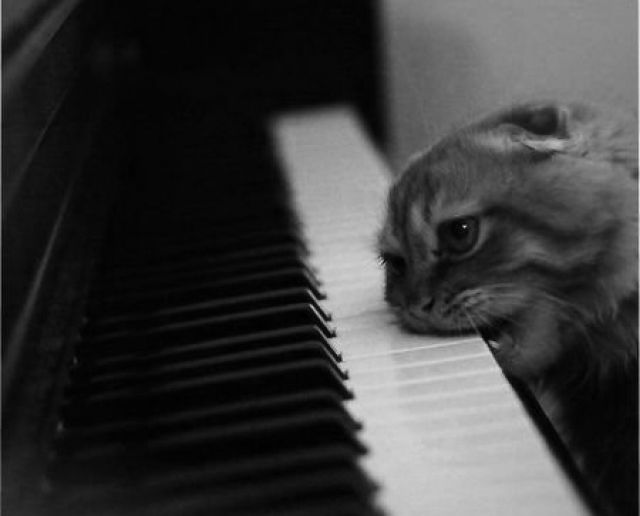 Happy Monday, music nerds! This is a big week for me, as I’m counting down the days until my recital this coming Sunday. Luckily for me, I get to practice on the piano in the recital venue every day this week, which is not something you can always count on.

During my scheduled time today, I decided to do a straight run-through of my whole piece. I didn’t feel quite ready to do so, but that was sort of the point — I wanted to see exactly where the trouble spots were going to pop up in the context where I have to keep going no matter what. I wanted to make myself nervous so I could get used to it before it arose naturally on performance day.

Hoo boy, it was a bit rough! One thing that’s always annoying is when you stumble over a passage that’s usually easy. Lately I’ve been practicing the hard bits extra-diligently, and I know I’ve been taking some of the easier portions for granted. So that was frustrating… And to make it more so, some of the hard parts that I had really worked on came out rocky too — grrr! (Though others went well — go me!)

As I got into the last sections of the piece, I realized that I had become a bit demoralized and uninspired, and as a result, I was just sort of playing measures rather than making music. I galumphed over the finish line, because that’s what you have to do, and then I heaved a heavy sigh and started to daydream about cookies.

It was the kind of moment when I really needed someone to burst in and say something along these lines:

But this isn’t a movie, and I’m an army of one, without a general or a coach or a Muppet to whip me into battle-readiness (McDoc was at work.)

Earlier in the day, I had tweeted this:

Counting down the days to my recital on 3/17! Please send good practicing vibes if you can spare them! fb.me/DsyfdtJv

And just at the moment when I was feeling pretty low, this reply came through on my phone:

@missmusicnerd I don’t practice any more, so I have plenty of vibes to lend you!

Now, I suspect my friend may be exaggerating when he says “never,” because I happen to know that he is occasionally spotted playing toy pianos and other fun things. But like most of us crazy, struggling musicians who didn’t have the good sense to inherit vast wealth, he has a number of irons in the fire, and I know how that can get in the way of sitting down to play on a regular basis.

I myself have gone for embarrassingly long stretches without practicing. I’m the type who needs a deadline if I’m to have any hope of accomplishing anything. A fearsome authority figure and the threat of public humiliation can help, too, but over time I have managed to develop some resistance even to such extreme productivity aids. Because in addition to there just being a lot to do to get through adult life, I have the typical self-sabotaging tendencies of any career depressive worth her salt.

I could just stop. I don’t have to give recitals. I could just write music and try to con other people into playing it. I don’t even have to write music, for that matter. I could just get a day job and be a moderately accomplished music-lover in my spare time. It would be the sensible choice, both financially and anxiety-wise.

But I can’t do it. I can’t stop. I realized this afternoon, sitting in a cavernous, dimly lit church, that I want to play the piano for the rest of my life, in whatever context and proportion I can manage. When I can no longer walk. I want my wheelchair pushed up to the keyboard, even if all I can do is drool on it. I want to play the piano on the day I die: I want my hospital bed wheeled up to it and my limp hand propped up on the keys. If I die in that position, I’ll be perfectly happy.

I’ve never been, and will never be, a great pianist. But I am a pretty good one. And I won’t give up playing, even if the throngs of meanies who say I should aren’t only in my head. I will play as long as I draw breath.

And I will practice every day this week, and I will perform on Sunday, and it will go how it goes, and some people will like it and others might not. Then McDoc and I will go out to dinner, and then I’ll come home and pet my cat. Ain’t life grand?

What do you love doing so much that you’ll keep at it til they carry you away in a box?