I was very excited to return to Heinz Hall on Friday evening (after having lunch there on Thursday!) to hear the Pittsburgh Symphony, because if there’s one thing I love, besides McDoc and chocolate, it’s the music of Béla Bartók. I wish there were a searchlight that would light up and guide me anytime Bartòk’s music was being performed, kind of like the Bat Signal… a Béla Signal! 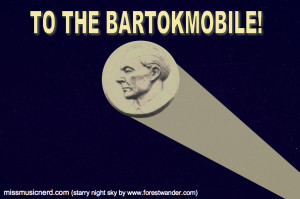 I knew I’d have to wait for the second half of the concert to hear Bartók’s Concerto for Orchestra — one of my favorite pieces of his. But I didn’t mind; the first half featured two works by Mozart, and he’s no slouch either. Still, I was taking poor Wolfgang a little bit for granted as McDoc and I made our way through the lobby. “Serenade this, piano concerto that… whatever,” I thought.

Mozart’s Serenade No. 6 in D major for Two Small Orchestras, K. 239, “Serenata notturna,” was not only charming and delightful to hear, it was also fun to watch. The smaller of the two small orchestras is actually a group of four soloists: two violins, viola and double bass, and the players made a semi-circle around the conductor’s podium as if around a campfire. Or a water-cooler. Or maybe a chocolate fondue fountain. Mmm…

Anyway, they were clearly having a good time, especially the first violinist and the violist, who were frequently paired in the music’s texture. At one point it occurred to me that I was hearing the classical music equivalent of a Fred Astaire-Ginger Rogers dance routine.

Here is a playlist with the Serenade’s three movements:

The Concerto No. 15 in B flat major for Piano and Orchestra, K. 450 was equally delightful, adding pianist Shai Wosner‘s graceful playing into the mix. I especially loved the second movement, with its surprisingly short orchestral introduction to the solo piano opening, and its sweet ending with piano and orchestra together. From the way Mr. Wosner moved a bit during the orchestral breaks, you could tell that he has also conducted concerto performances from the keyboard.

Speaking of conductors, Rafael Frühbeck de Burgos was a treat to watch. He’s the kind of conductor who eschews large bombastic movements in favor of efficient, understated gestures. Sometimes he would simply point, as if to say, “You, and you, and you over there!” And the orchestra responded smartly.

Here’s a playlist of the piano concerto:

After intermission, it was time for the big guns. One of the really cool things about the Concerto for Orchestra is the way it gives all the instruments of the orchestra a turn in the spotlight. The second movement opens very sparsely, with snare drum and a pair of bassoons, followed by oboes and clarinets in turn. And the third movement begins with a timpani-double bass pairing, soon joined by a plaintive, desolate oboe repeating a single note while clarinet, flute and harp shiver in the background.

The first movement starts out starkly too, with an ascending perfect 4th theme in the double basses (decades before Star Trek made that interval iconic!). Then the instruments gradually accumulate as a low, menacing phrase repeats with increasing speed. It’s menacing because it outlines the interval of a tritone: the devil in music! It makes your hair stand on end — in a good way. That’s what I came here for, baby!

Here are all five movements of the Concerto for Orchestra: