Happy Friday, music nerds! Today’s nerdy music links are coming to you from a mile high! 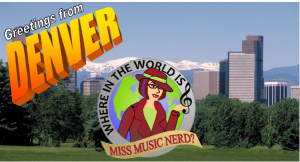 On Monday night I got to hang out with ETHEL, one of my favorite classical bands, at Berklee College of Music in Boston. Go here to read how they rocked the house, from Glass to Zeppelin!

But today, McDoc and I are in Denver, where he is attending

the Annual Assembly of the American Academy of Hospice and Palliative Medicine. He’s tweeting the proceedings for the benefit of medically-inclined folks (and to make it easier for me to keep tabs on him!)

What am I doing while we’re here, you ask? Well, in addition to walking around the city — I love exploring new cities — I decided to see if I couldn’t get in some piano practice. I was lucky enough to meet the very nice people at St. Barnabas Episcopal Church, including the choir director, David Bell. They were kind enough to let me practice on the Baldwin grand piano in their sanctuary, and I was reminded that I need to resume my Keyboards of the World series! Because you can never have too many piano pictures! 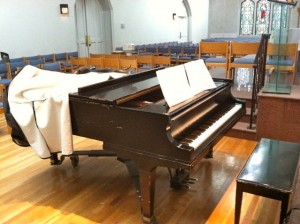 And the business end: 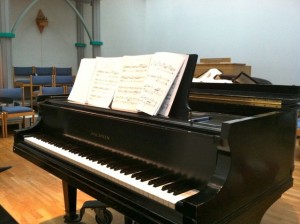 Of course, there was an organ, too, but I left it undisturbed, as I know how territorial we organists can be. The drums, though, they tempted me… 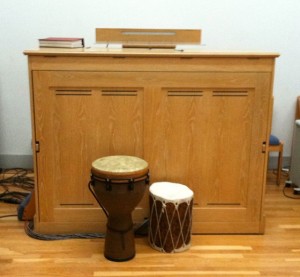 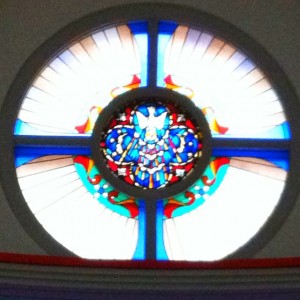 Of course, even though I’m a bit winded from the altitude adjustment, I haven’t forgotten about the viola! Here’s the Viola Joke of the Week, brought to you by Jenn at Ain’t Baroque!

Q. What’s the difference between listening to a viola solo and being tortured?

A. One is much more painful for your ears.

In other musical jokes, you may have heard this one before: A C, and E-flat and a G go into a bar, and the bartender says, “Sorry, we don’t serve minors!” But music nerd Andy hipped me to a version of the joke on Facebook that takes it to its musically geektastic extreme! (via Theinfamous Msc).

C, E-flat, and G go into a bar. The bartender says, “Sorry, but we don’t serve minors.” So E-flat leaves, and C and G have an open fifth between them. After a few drinks, the fifth is diminished, and G is out flat. F comes in and tries to augment the situation, but is not sharp enough. D comes in and heads for the bathroom, saying, “Excuse me; I’ll just be a second.” Then A comes in, but the bartender is not convinced that this relative of C is not a minor. Then the bartender notices B-flat hiding at the end of the bar and says, “Get out! You’re the seventh minor I’ve found in this bar tonight.” E-flat comes back the next night in a three-piece suit with nicely shined shoes. The bartender says, “You’re looking sharp tonight. Come on in, this could be a major development.” Sure enough, E-flat soon takes off his suit and everything else, and is au natural. Eventually C sobers up and realizes in horror that he’s under a rest. C is brought to trial, found guilty of contributing to the diminution of a minor, and is sentenced to 10 years of D.S. without Coda at an upscale correctional facility.

Today’s nerdy music links are brought to you by Miss Music Nerd’s Forest of Accidentals t-shirt, available NOW in the Miss Music Nerd store! You know you want one!