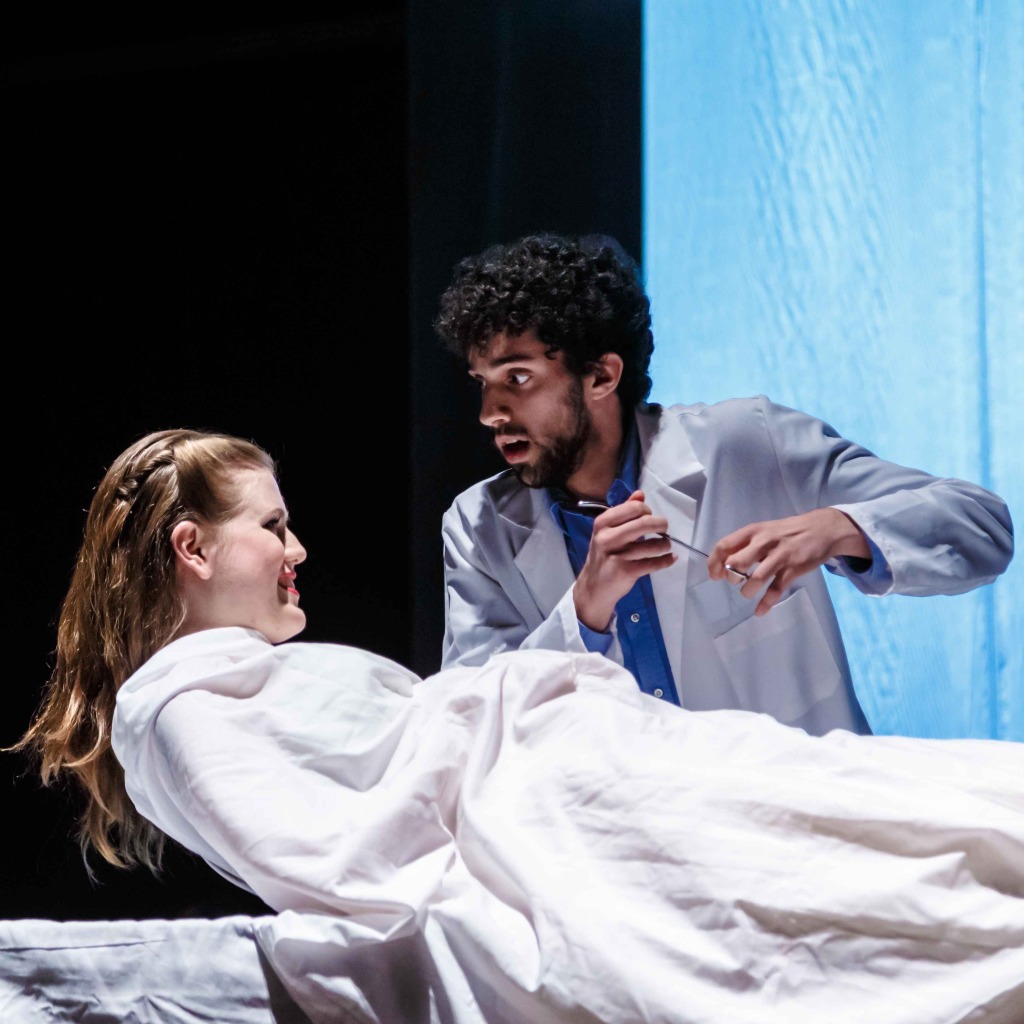 Last night, I got a glimpse of the future of opera.

Yes, opera does have a future, in case you were wondering. It may sound as crazy as touting the curative powers of radium as the cutting edge of medicine, but that’s just part of classical music’s ongoing PR challenge. Last fall, we were informed that opera is dead, but that report was late to the party, as we had already learned in January that the entire genre of classical music had met its demise. It’s baloney, bunk, hogwash, hooey, and poppycock, of course, but that’s a topic for another day. Now, where was I?

Oh yes: at the Pittsburgh Opera’s George R. White Studio, where students from Carnegie Mellon University presented Co-Opera, and evening of five newly-minted short opera projects, to a packed audience of family, friends, and smart people who’ve gotten the memo about opera as a vital and vibrant art form. As a composer, I can tell you that writing an opera is a compositional Holy Grail, something every composer I’ve ever known dreams of doing. And as the Opera’s General Director Christopher Hahn welcomed the audience, he reminded us that “all great operas had an opening night,” and that some of the standard works of the opera repertoire didn’t succeed immediately. The opportunity to risk “the possibility of failure in a nurturing environment is a good thing” for the brave souls who take on the challenges opera presents. Failure wasn’t anywhere to be found in last night’s productions, though, only the impressive result of a year-long process of collaboration between students from several disciplines: music, drama, art, and arts management. 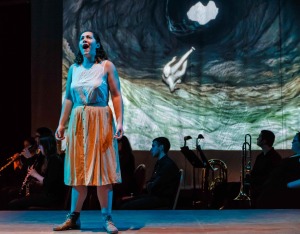 The evening opened with Echo, by composer Davis Good and librettist Josh Ginsburg. The piece sets the Greek myth of Echo and Narcissus in an Appalachian coal-mining community. Narcissus is a naive but well-meaning young miner, and Echo is the daughter of an older miner who struggles to keep up with his demanding, dangerous job. Zeus is the lecherous mine overseer who uses his position to manipulate Echo into covering for him with Hera. The music lyrically depicted the lovesick Echo, making judicious use of the musical implications of her name without overdoing it. Instead of nymphs, three village girls form a Greek chorus, teasing Echo about her feelings for Narcissus and warning her not to anger Zeus or his jealous wife, in three-part harmony by turns lovely and ominous.

Cold Hands, by composer Dayton Kinney and librettists Dan Giles and Julie Jigour, is quite the unconventional romance — it begins with a mortician in the process of preparing a woman’s body, while she repeatedly sits up and asks him, “What’s that?” as he lifts out her duodenum and jejunum. Both music and words brought out the humor in this potentially ghoulish setting, as well as the story’s poignant turn. Carl the mortician envies and idealizes his… customers, I suppose you’d call them… singing of their peaceful existence, free from life’s disappointments and no longer “wanting, wanting, wanting.” He idealizes Anna even as he dismisses her concerns about the effects of formaldehyde she’s beginning to feel, but she resists the peaceful pull of death as she reflects on her life as it was and as it might have been. It’s the ultimate grass-is-always-greener situation, and a thought-provoking reflection on our desire for control over our circumstances. 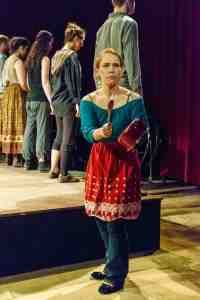 In The Elephants, by composer Xiao Liang and librettists Savannah Reich and Jonah Eisenstock, five singers portray elephants whose habitat has been encroached upon by humans, and both sides struggle with whether to respond with peace or force. The portrayal was subtle and tasteful, with the elephants in simple work clothing. When a member of the herd interacts with a villager, her singing becomes wordless, to represent their communication barrier. But the villager recognizes her voice as that of the young elephant who had been tamed by his family when he was a boy, but later escaped. The man apologizes for the human impact on her home, and she abandons thoughts of trampling is, as they share a very moving reunion. 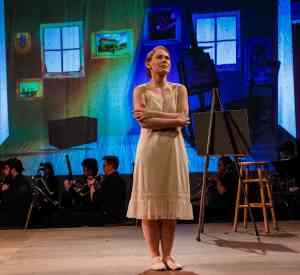 Last Night in the Hague, by composer Chung Wan Choi and librettists Wei He and Tracy Held Potter, depicts the end of a relationship between Vincent Van Gogh and Sien, a desperate, poor woman who had resorted to prostitution to feed her two children. Their struggle with poverty and his flickering confidence in himself as a painter are constant sources of stress, and she ultimately releases him and urges him to pursue his art. The music is appropriately passionate and moody, breaking into a mad waltz when Vincent describes how his brush “dances across the canvas.” 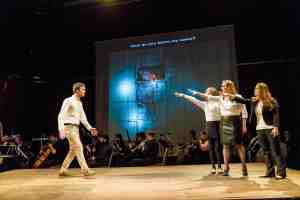 In For the Time Being, by composer Daniel Arnaldos and Librettists Barbara Jwanouskos and Stephen Webb, a young man named Owen has his faith in love restored by supernatural means as he travels through a desert with his friends Hazel and Maple, who want to reach the remote chapel where their wedding is to take place before night falls. When he gets separated from the couple, Love herself, in the form of a triune being named Amara, played by three female singers, appears to him and thaws his heart, even as she breaks it a little by revealing why she can’t go back into reality with him. The music was ecstatic and luminous; the three high voices of Amara combined with Owen’s countertenor created the otherworldly effect called for by the story.

In lieu of stage sets, media artists created images projected on a screen at the back of the stage. This was a wonderful concept, as it kept the physical setting simple and economical, while opening up an unlimited virtual visual palette. Unfortunately, I found the particular visuals mostly very distracting, full of movement that may have been suggested by the motion of the music, but was out of sync stylistically with the sound and the stage action. The main image in Echo was a statue-like figure that fit the story well, until she began floating around the screen in oddly contorted positions. I preferred the mid-century graphics of Cold Hands, but I wished for more stillness. Images for The Elephants were mostly two shapes floating on a solid background, and too often they seemed to imply elephant ears. Van Gogh’s studio background had empty frames that later filled with his paintings, which was a nice touch. The images behind For the Time Being were perhaps the best-suited, since the story was closest to present-day, and the visuals evoked the desert setting without being too literal. I admit that I’m a bit old-fashioned when it comes to animation and digital art, though. I also yell at clouds, and you kids do, in fact, need to get off my lawn!

But I won’t stop telling anyone who will listen that new opera is a thing — a compelling, exciting one that more people should know about. I’m heartened to see how Pittsburgh Opera and CMU are contributing to the cause!

All photos by David Bachman Photography.