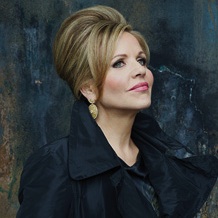 Every once in a while, a live performance goes beyond just being enjoyable and actually seems to permeate my body like a magic beam, giving me chills and making me sway in my seat. It’s as if, while playing the music, the performers are also playing me. (That may sound weird, but… what do you expect around here? 😉 )

And that’s just what happened last night when Renée Fleming sang George Gershwin’s “Summertime” as the first of three encores at the end of the electrifying recital she gave in the town where she was born. The next time the vicissitudes of life make me feel jaded and disconnected from my love for music, I hope I will look back on her performance of this song and be reminded of what it’s really all about.

“Summertime” from The Art of Renee Fleming

But I’m getting ahead of myself! A couple of weeks ago, McDoc mentioned to a coworker that I had just attended the Grammy Awards (he loves to brag on me — isn’t he sweet? 🙂 ), and his coworker told him that Grammy-winning soprano Renée Fleming was giving a recital in our neck of the woods (give or take a 1 1/4 hour drive), which is certainly not something that happens every weekend. We decided we’d better listen to what the universe was telling us, and get to that recital! And so last night, we did.

We made the trek from Pittsburgh to Indiana… Indiana, Pennsylvania, that is, home to, of course, Indiana University of Pennsylvania. Are you confused yet? I know I am! If it helps any, there is also a California, Pennsylvania with a similarly named university. Actually, I don’t think that helps…

Anyway, it turns out that Indiana, PA is Renée Fleming’s birthplace, and both her parents graduated from IUP’s music program in 1959. In fact, she gave her recital on the very stage where her parents had performed as students. That is pretty darn cool! Her father attended last night’s performance, along with a group of about 30 other family members… Oh, and the governor and first lady of Pennsylvania, too. It was kind of a big deal!

The program was wonderfully varied and dynamic, ranging from Handel arias to selections from A Streetcar Named Desire, André Previn’s opera based on the Tennessee Williams play, with a healthy dose of romanticism and impressionism in between. Ms. Fleming took several opportunities to speak to the audience about the music, with an easy, engaging stage presence that complemented her dazzling yet warm performance style. At one point she asked the audience, “Can you see the texts?” because she wanted to make sure we knew what she was singing about.

The program opened with four Handel arias: “Oh sleep, why dost thou leave me?” and “Endless pleasure” from Semele, “To fleeting pleasures make your court” from Samson, and “Calm thou, my soul” from Alexander Balus. Speaking about these arias, Ms. Fleming said she felt Handel’s music was very modern, even though it was written 300 years ago, because of the subject matter: unrequited love, hedonism, seduction. Referring to the aria from Samson, where Delila attempts to win back the man she had betrayed, Ms. Fleming quipped, “It’s not the good girls who are remembered.”

Next came quite a contrast in three songs by Richard Strauss: “Stänchen,” “Morgen” and “Zueignung.” Ms. Fleming told the audience that Strauss wrote “Morgen” (Tomorrow) as a wedding gift for his wife, and the text certainly fits:

And tomorrow the sun will shine again
and on the path that I shall take,
it will unite us, happy ones, again
upon this sun-breathing earth,

and to the shore, broad, blue-waved,
we shall, quiet and slow, descend
silent, into each other’s eyes we’ll gaze
and on us will fall joy’s speechless silence…

I loved the way Ms. Fleming reveled in Strauss’s luscious romanticism, And pianist Richard Bado literally made the piano rock with the cascading chords of “Zueignung” (Dedication).

I was excited to hear excerpts from Previn’s Streetcar. It was premiered 15 years ago by the San Francisco Opera, and Ms. Fleming originated the role of Blanche DuBois in that production. She will reprise the role later this month at New York’s Carnegie Hall, and with the Lyric Opera of Chicago. The music is at turns jazz-inflected and angular, and hearing these excerpts made me want to hear the complete work.

Here’s a playlist with the arias Ms. Fleming performed, from the San Francisco Opera recording:

The second half of the program took us to French and Italian territory. Four songs by Claude Debussy on texts by Paul Verlaine stood out to me on the program as music that really fit Ms. Fleming like a glove, showcasing her voice at its smoothest and most sublime. She described them as “the perfect marriage of music and poetry.” The songs showed her dramatic range, too, from “Il pleure dans mon cœur” (There is weeping in my heart), which is as good a description of depression as I’ve ever encountered, to “Mandoline,” a joyful, mischievous romp, providing one of a few moments during the evening where Ms. Fleming literally hopped up and down.

It seemed only natural on this occasion that Ms. Fleming sing the beloved Puccini aria “O mio babbino caro” (Oh My Beloved Father), what with her father in attendance and all. Before singing it, she told a story about finding a photo of her parents taken in Indiana, holding her as a baby. She expressed gratitude for the music education they received at IUP, and how it contributed to “creating a monster — me!”

“O mio babbino caro” from The Art of Renee Fleming

At the end of the performance, the audience was on its feet. I talked about the first encore above, and Ms. Fleming didn’t stop there. During her second encore, “I could have danced all night” from My Fair Lady, she invited the audience to sing along, which they did with zest. Finally, she closed with “Danny Boy,” and there was many a moist eye in the house!

Here, by the way, is a playlist of Ms. Fleming’s recording Poèmes, which won Best Vocal Solo at the 55th Grammy Awards.