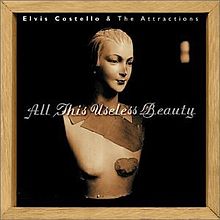 There are two kinds of people in this world: those who love cilantro and Elvis Costello, and those who are wrong. And I may be wrong about a lot of things, but I’m glad to say I got these essentials sorted out early on.

I was introduced to the album All This Useless Beauty

by a fellow composer of high-falutin’ modern classical music. It has been one of my favorite albums ever since, and its closing track, “I Want To Vanish

,” is probably my favorite song on the album, though it’s difficult to commit. (By the way, there’s an outmoded but stubbornly persistent perception still floating around that it’s contradictory for classical musicians to love popular music. Not only do we love it, but many of us write it ourselves, late at night under the covers with a flashlight, waiting for the ghost of Arnold Schoenberg to come and haunt us… and chat with us about his Cabaret Songs.)

Elvis Costello & The Attractions – I Want To Vanish

One reason I love this song is the instrumentation. When orchestral instruments make good use of themselves in pop songs, I just want to run around in circles like a kid whose Halloween candy hasn’t been subject to rationing. This song uses piano, string quartet (the Brodsky Quartet, specifically, which had collaborated with E.C. before), double bass, clarinet AND bass clarinet. Not a drum or an amp in sight! (Not that there’s anything wrong with them!) Be still my heart!

Then there are the lyrics, and here’s where it gets tricky.

(Chorus:)
Whether in wonder or indecent haste
You arrange the mirrors and the spools
To snare the rare and precious jewels
That were only made of paste

If you encountered these words in the form of a note from your slightly melodramatic loved one, you might be legitimately alarmed. But the sweet, lullaby-like music tempers the desolation of the words and exposes the writer’s ambivalence. Now, we can only speculate as to what Elvis himselvis was really thinking while writing these lyrics, but when the artist releases the artwork into the world, the world does what it wants with it, so I will proceed to project and interpret with wild abandon.

Have you ever encountered a person, particularly someone of the teenage persuasion, whose appearance and overall manner seem to shout “Look at me!” and “Go away!” simultaneously? And have you noticed that this way of being can prompt a range of reactions, depending on how it’s deployed and how the parties involved are predisposed? It can be annoying, alienating, infuriating; but it can also be endearing, evoking feelings of affection and protectiveness. Perhaps your reaction partly hinges on how willing you are to admit to having been that person at one point or another.

Even if you have been that person, and are willing to admit it (Howdy!), you might still puzzle over why human beings act as they do. So what’s the deal here?

There’s a world-weariness, but at the same time, the landscape of the lyrics is oddly charming. The “curious fate” he wants to evade — being “captured” and “laid on a decorated dish” — might not be anyone’s first choice, but it ain’t exactly the salt mines, either. And this imagery in the chorus of mirrors, spools, and paste jewels — I imagine a contraption designed jointly by Rube Goldberg and Neil Gaiman, and who wouldn’t want that, working or not? It seems the writer is being a tiny bit of a drama queen. A drama princess, perhaps.

Still, I empathize. I attribute the vexation in evidence here to the lack of control we have over how others see and respond to us, compounded by the oft-imposed expectation that we be responsive to and responsible for these reactions we can’t control. If you’re not entirely done figuring yourself out (and who is?), it’s mighty exhausting to have to keep explaining yourself to others who won’t get you no matter what you say. If you’re both an introvert and a creative artist with a desire to share your creativity with the world, this process is especially draining, and yet it seems to be the price you pay. It’s understandable that chucking it all and waltzing into the wilderness might appeal at times.

And, oh yeah, the Lent-related part.

So, it’s a penitential season. What does that mean exactly? Any foray into self-examination, humility, repentance, and the like risks slipping into self-pity and/or self-righteousness. It’s treacherous terrain. One effect I noticed about my Facebook use, and one reason I knew I needed a break from it, was that I often ended up feeling crappy about myself after viewing so many posts about the fabulous things happening in other people’s lives that weren’t happening in mine at that moment. (This dynamic has been studied and written about widely in recent years.) And I wondered if my good-news posts had ever contributed to someone else feeling bad? Yikes.

After I told my Facebook posse about my 40-day vacay, one friend told me about Lent Unedited, a very thoughtful antidote to the online perfectionism problem involving, simply, sharing the imperfect side too, trusting that friends will accept and understand. And they will — I’ve seen it, and been on the receiving end myself when I really needed it.

But confessional posting can get out of hand, too — there’s a temptation to habitually and serially post appeals for advice, attention, support, etc., that can keep you mired in narcissism and self-pity. Look at me! Go away! I’m “rarer than most!”

I might just be a little bit prone to that sort of thing, which is why I stuck with my planned Lenten gig, less drastic alternatives notwithstanding.

I’m 4 days in, and it has been interesting. In addition to the social media self-esteem-eroding effect, I notice that I use idly hanging around online as a default activity whenever I feel lonely, insecure, or averse to doing what needs to be done. I try to get the internet to do for me what I need to do for myself. (Spoiler alert: it doesn’t work very well.)

Ultimately, the only one who can “give [you your] rest”… is you. With the help of your higher power or whatever, if that’s your bag. Point is, it won’t come from what other people think of you. We can support each other, but we all have to figure out how to live in our own skin.