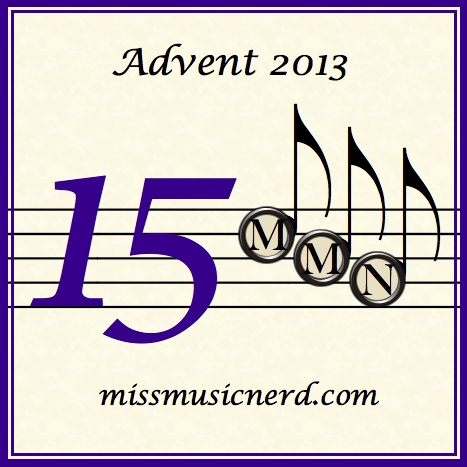 UPDATE: See parody of the Bowie/Crosby version below!

There is a dark side to Christmas, music nerds — it’s not all twinkly lights and cookies. I talked a little bit about seasonal melancholia on Day 13, but it gets even darker than that.

Every year, we get to hear the traditional Christmas music we love, but sadly, we’re subjected to the music that irritates the living daylights out of us, too. Of course, one person’s most-dreaded song may be another’s most-anticipated… though periodic surveys yield a few common titles again and again.

I’ve discussed this topic with friends over the years, and “Little Drummer Boy” is a popular entry on the least-favorite Christmas song list. That onomatopoeic pa-rum-pa-pa-pumming just doesn’t do it for many of us. McDoc related to me a particularly painful childhood memory of when the song came on the radio, and he began frantically conversing with everyone in the room to distract — or maybe protect — them from music he found “alarmingly embarrassing” for performers and listeners alike.

So we were pleasantly surprised to hear a version that didn’t make us want to pack snow into our ears with a shovel. The solution to the song’s problems? Replace the silly nonsense syllables with an actual drum, add in some kick-ass close harmony, and voilà!

That’s an excerpt from a version by three Canadian singers: Jill Barber, Rose Cousins, and Meaghan Smith, from their Christmas CD A New Kind of Light. They recorded it in 2005 as a fundraiser for Feed Nova Scotia, a charitable organization that works to fight chronic hunger and poverty in the province. McDoc learned about the CD back when we lived in Detroit and the best local radio station was CBC Radio 2, and it has enjoyed heavy rotation in our household every year since. The link to order it is still up as I write this, so as far as I can tell, it’s still available. It’s not on iTunes or Spotify or anywhere else I can find, so you just have to trust me that it’s really good. (One of the tracks is on Soundcloud: “In The Bleak Midwinter.”)

Oh, and one more thing: I just about exploded with nerdicity when I first saw the duet version by Bing Crosby and David Bowie, complete with hokey dialogue setup. One writer said it “makes my skin crawl,” but I think it’s fabulous in that way that only something from the 70s could be. Is it cheesy? You bet it is! Bask in it, music nerds, bask!

Update 12/18/13: But wait, there’s more! Will Ferrell and John C. Reilly do a perfect parody of the Bowie/Crosby collab, by playing perfectly straight… until the very end, at least…