Several years before I met my dear, sweet McDoc, I had a gentleman friend who appreciated classical music, but who, like many classical listeners, was not well-versed in classical composition after 1900. So when he accepted my invitation to attend a performance of contemporary chamber music, I warned him that it might be challenging to listen to, and would sound quite different from the classical music he had heard before. But he was an open-minded person, and agreed to accompany me.

One of the pieces on the program was Arnold Schoenberg‘s Pierrot Lunaire, a seminal masterpiece of 20th-century music. Its significance is such that the instrumentation Schoenberg chose for the work, which was perhaps novel at the time, is now a standard grouping: flute, clarinet, violin, cello, and piano. An extension of this category that we in the biz call “Pierrot plus percussion” is still the core instrumental lineup for many ensembles that specialize in contemporary music.

Oh, and the original Pierrot includes a singer as well, usually a soprano, employing a technique called Sprechstimme (“spoken voice”), a sort of hybrid of singing and speech that can definitely sound odd if you are expecting purely one or the other. The text is in German, and the character and subject matter are a bit “out there” — the title means “Moonstruck Pierrot,” after all.

My friend was a very good sport during the concert, but ever after that, he referred to Schoenberg’s piece as “that German appendectomy you dragged me to.”

Here’s another way to describe the challenge of this piece: “[It’s] traditionally admired by many, especially music geeks, but not liked by that many people, including many of the very people who say they admire it.” Those are the words of Kevin Noe, Artistic Director of the Pittsburgh New Music Ensemble, who are performing the work this weekend. The program begins with a companion piece, “Drunken Moon,” by Kieren MacMillan, which sets up a dramatic context for Pierrot Lunaire and then flows seamlessly into it. The production is fully staged, set in a cabaret with the instrumentalists as both house band and bar patrons. The text is divided between a male and female singer, who act out a multi-dimensional relationship that may or may not be all in someone’s head. 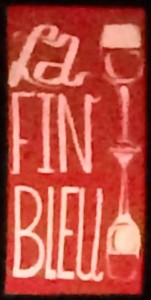 I was fortunate enough to attend a sneak preview at the ensemble’s dress rehearsal today, and like pretty much everything they do, it was a revelation. They used an English translation of the text, which I was skeptical about going in, but it worked beautifully, and facilitated a more intimate and emotional connection to the work. The subject matter of the poetry is by turns fanciful, morose, blasphemous, and violent, and it had never been entirely clear to me what the whole point of it was. But the stage action PNME has created opens a new world around it, and illuminates it as an exploration of the human psyche in all its lunatic glory. There’s no abdominal surgery involved, but you might still feel a bit different after witnessing it.

If you’re in the Pittsburgh area, check out PNME’s “Drunken Moon” Friday, August 1 and Saturday, August 2, at 8:00 pm at the City Theatre. If you’re a first-time attendee, admission is free! Tell ’em I sent you — I promise it won’t hurt a bit!