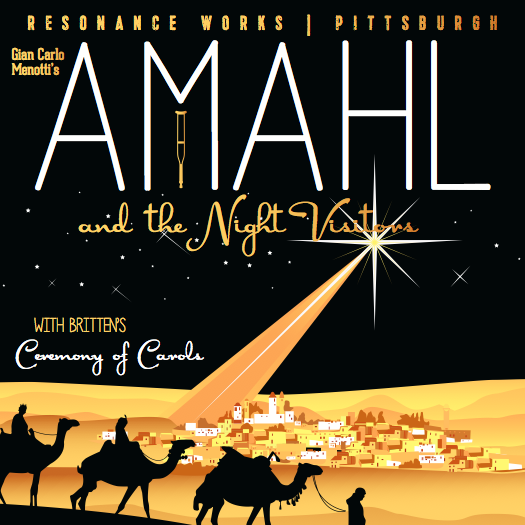 It’s the holidays, music nerds, and you know what that means: lots of music! And that could be good news or bad, depending on the music in question. One contribution to the bright side comes to Pittsburgh tonight, as local group Resonance Works presents the Christmas-themed opera Amahl and the Night Visitors, by Gian Carlo Menotti, along with Benjamin Britten’s Ceremony of Carols.

I got to sit in on their dress rehearsal on Wednesday evening, and the production is charming, with beautiful singing, clever costumes, and some fun surprises in the staging. (Check out what the Three Kings use for travel in lieu of camels!) It also takes the kind of intimate, audience-immersive approach that worked to such great effect in their delightful production of Donizetti’s comic opera Elixir of Love in September of this year.

The story, which the composer conceived and wrote the libretto for based on his own childhood memories of Christmas in Italy, focuses on a disabled boy who likes to tell fantastical stories, much to his mother’s consternation. When he tells her of a giant star over their roof, and later, of three kings outside their door, she scolds him, but then she sees that this time he was telling the truth. Singing, dancing, well-meaning attempted theft and a Christmas miracle ensue.

I had hoped to get a chance to chat with the cast members, but I’ve been fighting off a bad cold that I didn’t want to give anyone, least of all singers about to perform, so I opted for a quick email exchange instead. I asked each one to describe their character and their favorite moments in the piece, and they gave some great answers! 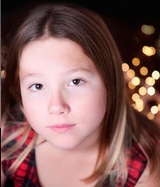 How would you describe the personality of character you play?
He has a big heart, and he is strong and trustworthy.

How is your character’s personality similar to your own? How is it different?
Similarities: I’m also curious & strong. Differences: he’s childish & agreeable, I’m not!

What is your favorite moment in the opera?
There are many favorite moments but one of them is when Kaspar starts to sing “This is My Box.” It is such a lively and happy song. 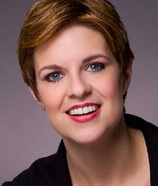 How would you describe the personality of character you play?
My character in this interpretation of Amahl is proud, attempts to be optimistic but really struggles with that, and like most mothers, will do anything to keep things okay for her son.

How is your character’s personality similar to your own? How is it different?
I suppose I’m like her in all these ways, either because I lack imagination or because I base her on myself. 🙂

I performed this role before I had children, and now I have two sons, one 2.5 yr old and one 6 week old. I always felt the mother’s love for her son very deeply, but now I really know first hand the other emotions as well. In particular, the near-universal parental roller coaster that shifts minute-by-minute between purest patience and utter frustration!

What is your favorite moment in the opera?
There are so many moments to love! In order of occurrence, I love when Amahl and his mother are saying goodnight after he comforts her about their miserable situation because it is so very sweet. Then the kings’ entrance. That music is so mysterious and Jonathan, Dan, and Robert sing it so beautifully!

I’m very fond of the “Have You Seen a Child…” quartet. It just plain old feels good to sing, very passionate music.

The departure of the Kings and Amahl is also very moving to me. It’s only a result of moments that are actually much more powerful (the walking, hello!) but as the chick playing the mother, I really acutely feel it when waving goodbye to Amahl. True confession: the tears you may see brimming in my eyes at that point are not artifice, they’re me imagining saying goodbye to my own boys when they grow up and move on to their destinies. 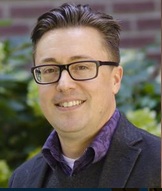 How would you describe the personality of character you play?
Kaspar is a sweet, doddering old man, hard-of-hearing (how selectively is open for debate!), mystical and fun-loving, with one foot already in the next world.


How is your character’s personality similar to your own? How is it different?
I’d like to think I’m a younger version of that character; I’m capable of being as sweet and joyous as he is, but I have a fair amount of wisdom to achieve in the years that lie ahead.

What is your favorite moment in the opera?
That’s easy. The section between the first bar and the last. The piece is as near-perfect as anything I know from any genre. The proportions are exactly right–nothing goes on too long, no moment is overplayed. Menotti clearly tapped into something deeply personal while writing this opera, but was able to find the discipline to employ his craft to be able to make his point without letting it become didactic. It’s an extremely rare achievement in music, especially in opera. But if I have to chose one thing out of the whole, I’d have to say the opening 10 bars, specifically the passing dissonance in the viola on the downbeat of the 7th bar. It conveys a whole world of gentle innocence in the midst of longing and need, but stays perfectly within the frame Menotti has set for himself. 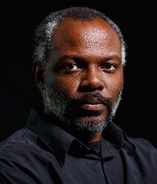 How would you describe the personality of character you play?
For King Balthazar I’m trying to channel Worf from Star Trek: the Next Generation. He’s powerful, proud, and a bit gruff, but he has a heart of gold underneath.

How is your character’s personality similar to your own? How is it different?
I’m more snarky than gruff.

What is your favorite moment in the opera?
I love the mother’s aria, “All that gold.” It’s beautiful music, sung beautifully by Barbara LeMay.

Resonance Works’ production of Amahl and the Night Visitors also features Daniel Teadt as King Melchior and Jacob Churilla as the Page. The stage director is David Gram, and Maria Sensi Sellner conducts.