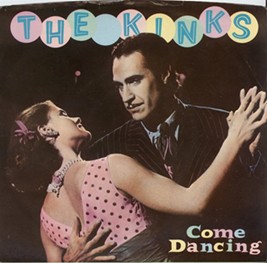 I don’t like to admit this, but I am old enough to remember when MTV just played music videos. I know, it’s hard to believe either of those things, but you’ll just have to trust me, music nerds. When I was in high school, MTV was my radio station and my music discovery system, introducing me to the songs that would fuel my moody adolescent angst, and later, my bewildered adult nostalgia. (McDoc and I have had this conversation more than once: “I love this [song or album]! It just came out a few years ago, right?” “Sweetie, it came out in 1993.” “Shut up.”)

One of the videos that seared itself into my not-yet-fully-developed brain was “Come Dancing” by the Kinks. I loved how it harkened back to the 50s both musically and visually, with a brass section evoking a big band sound, and its dance hall patrons in sharp vintage clothing. And I loved the story it told, of a young boy watching his older sister go out to the dance hall, then growing up to be the singer in the dance hall’s band. As for the sister, she grew from a young woman who stayed out too late with dance partners lining up to woo her, to an older woman who has to be coaxed just to stand on the dance floor, as one of her old suitors watches wistfully from the balcony.

By the way, note the little gem of music nerditry around the 1:33 mark in the video: the bandleader is actually beating a correct conducting pattern in time with the music. See, makers of film and television? IT CAN BE DONE!

I always thought the video’s profound nostalgia went beyond just depicting a powerful childhood memory; it was almost melancholic, implying some untold tragedy. And I always wondered why. I never expected an answer, of course, and I had actually completely forgotten about it until the other day, when I happened to catch the Kinks’ lead singer Ray Davies being interviewed on NPR’s Fresh Air.

Davies mentioned his six older sisters, all musical, all lovers of dancing at “the local Palais.” But one sister in particular, Rene, had the strongest influence on him and his musical life: she gave him his first guitar for his 13th birthday. And here’s the untold tragedy: that same night when she went out dancing, she had a fatal heart attack on the dance floor. She was only 31 years old, but contracting rheumatic fever as a child had left her susceptible. So “Come Dancing” is a tribute to her as well as Davies’ musical origin story.

Of course, I was pretty verklempt when I heard this, especially because it was the day before Thanksgiving, so family was very much on my mind. I have an older sister, and you could say that she played an important role in my formation as a musician. I remember crawling under the piano bench while she was having her lesson, and being shooed out of the room by her teacher. Nothing like making piano lessons into forbidden fruit to plant the seeds of future music nerddom! My sister also taught me my first piano piece, appropriately titled “My First Waltz.” And I have a very vivid memory from when I was 7 or 8, of finding the music for the Moonlight Sonata sitting on the piano after she had practiced. I hadn’t yet reached the point in my piano lessons of reading all those crazy ledger line notes, or grokking triplets, or dealing with four sharps, but I sat there with my nose glued to that thing until I figured it out. No more “Mary Had a Little Lamb” for me, y’all!

I’m happy to say that my sister is alive and well — here we are last year, about to take a joyride in my brother’s Miata! 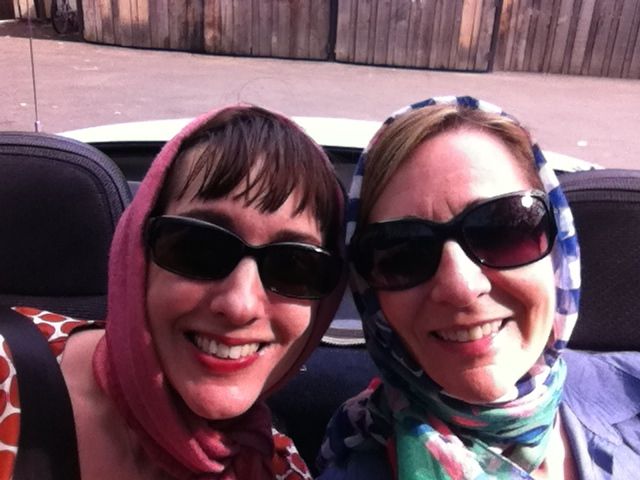 Here’s to Jennifer, who helped make me who I am. I love you!