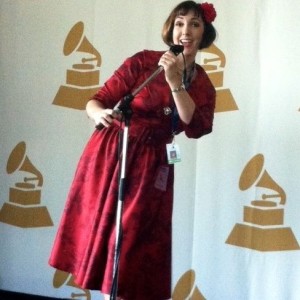 Goofing around backstage at the 55th Grammy Awards, February 2013

Greetings music nerds! I’m excited to announce that I will once again be attending the Grammy Awards as the Community Blogger for Classical Music. It’ll be my 5th year serving in this capacity, and I’m looking forward to seeing my fellow Grammy bloggers again when we head to L.A. in January 2014!

But the fun begins before that, when the nominees are announced on December 6. Getting the list of classical nominations is always like an early Christmas present, as it assembles so much talent in one place. It tends to be an interesting mixture of familiar, “big name” orchestras and stars, plus many intriguing less-well-known artists. Of course, many worthy recordings go un-nominated each year — there’s just too much amazing work going on in the classical field!

Many people aren’t aware that there are classical categories at the Grammys at all, because you don’t see them announced on the Sunday evening television broadcast, which focuses on pop and rock genres. My main event happens earlier on the day of the broadcast, when the vast majority of awards are given out during a lighting round we call “pre-tel.” You won’t see it on TV, but it will be streamed online at grammy.com.

There are several other exciting events during the week leading up to the awards show, and I’ll be live-tweeting and blogging about my adventures among the stars. Stay tuned!