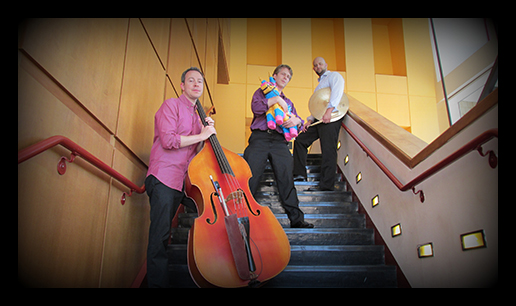 Did you know, Music Nerds, that classical music can be fun? I know, many people will tell you differently, but I am here to testify that it is so, and I solemnly swear to tell you the fun, the whole fun, and nothing but the fun.

Last night I attended “Swinging With A Blindfold” featuring Project Piñata, part of Chamber Music Pittsburgh‘s “Just Summer” series at the Kelly-Strayhorn Theatre in East Liberty, Pittsburgh. Project Piñata has the instrumentation of a jazz trio, with David Cutler on piano, Craig Butterfield on bass, and Marc Widenhofen on drums. Violinist Erika Cutler joined the group last night as a special guest. One might expect a hybrid of jazz and classical from this setup, and that is part of what we heard last night, but the performance defied categorization by drawing freely, even voraciously, from every corner of the musical world. (Cutler referred to the group as a non-jazz jazz trio.)

The bulk of the program was a set of pieces titled Shooting Stars. Introducing the work, David Cutler talked about accompanying his young son, a budding violinist, on the songs from the Suzuki Method repertoire. Cutler quickly grew bored with the simple written accompaniments and began improvising his own, adopting a different genre of music for each one. This spontaneous and audacious reworking of the Suzuki songs was a big hit at his son’s recital, so Cutler and his Project Piñata co-conspirators re-imagined thirteen of these familiar tunes as an ensemble.

The arrangements took folk songs and classical staples such as Bach minuets and Hadron-collided them into distinctive musical styles like Boogie, Ragtime, Funk, Klezmer, etc. The performers clearly had a blast, and their energy was infectious. I, for one, was bopping in my seat.

Now, even when music is fun, it can still be educational, so last night’s audience was given golf pencils and the task of guessing the style of each song! The program included a list to choose from and blanks to fill in: 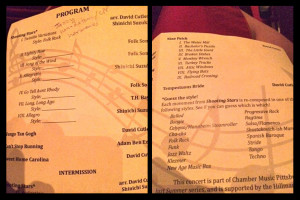 …and the audience member who scored highest got a prize! I was confident that it would be me, but it turns out that I do get my Latin rhythms mixed up on occasion. Also, I was surprised to learn that techno and Shostakovich appear to have a lot in common. I guess that’s what happens when you refuse to be contained by stylistic boundaries!

While introducing Nine Patch, a suite of pieces he wrote to accompany Indian kathak dancing, David Cutler gave the audience a chance to try out the Indian system for learning rhythm, which uses recited syllables and a specific method of clapping. Sounds easy, right? But when you combine a pattern of 15 syllables with a clapping pattern of 8 beats, it gets complex real quick. It was fun to take a stab at it, though!

Bass player Craig Butterfield performed Can’t Stop Running by Adam Ben Ezra. The piece is not notated, and it uses several percussive techniques, so learning it by ear was a challenge, Butterfield explained. He made it look easy, though. Here is the composer’s performance of the piece:

After the performance, the performers invited the audience to ask questions. The first thing I wanted to know was, what’s with the Piñata? This was their stage mascot, so clearly they meant it:

David Cutler explained that a piñata is a good metaphor for what their approach of “taking perfectly good music and smashing it open to find all of the different, interesting things inside.” He also expressed his philosophy that “everything is a canvas” and “nothing is off limits.” Miss Music Nerd approves. It’s important to note that if you are going to wildly combine musical styles with the same abandon as a mad scientist mixing volatile chemicals, you have to be very well-versed in those musical styles before you start tinkering with them. Project Piñata definitely has the chops to chop things up.

In addition to being a pianist and composer, David Cutler is a professor of music entrepreneurship at the University of South Carolina. I picked up his book on the subject, The Savvy Musician, which I’m looking forward to digging into. 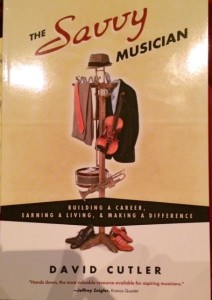 A young music student in the audience asked, “Do you have any advice for musicians just starting their careers?” Cutler’s answer is a great one for musicians at all stages of development, but it is great advice for life in general. He said, “Be courageous. You don’t have to live any life but your own life. There are no rules but the ones we ourselves set.”

It’s a bit long I know, but I kind of want to get that tattooed somewhere.

Chamber Music Pittsburgh has one more concert on the Just Summer series: