On Thursday morning, I attended an open rehearsal of the Boston Symphony, in preparation for this weekend’s performances, which include the world première of a Violin Concerto by English composer Sir Harrison Birtwistle. I was fortunate enough to have the opportunity to chat with him after his piece was rehearsed. 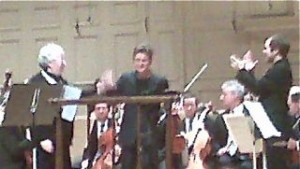 The program also features Mozart’s Rondo in C for Violin and Orchestra, and Bartók’s Violin Concerto No. 2. Yes, that’s right, violinist Christian Tetzlaff is playing not one, not two, but three solo-with-orchestra pieces. Talk about a rock star! I heard the whole performance on Friday afternoon, and it was something else!

You can hear a live broadcast of the piece tonight at 8 pm Eastern – just go to WGBH All Classical and click “Listen to Live Stream.”

And if you’re in the Boston area, you have two more chances to catch the live performance: tonight at 8, or again on Tuesday evening. Tell ’em Miss Music Nerd sent you!

As Sam Brewer of the BSO public relations office remarked, Sir Harrison has a very poetic way of speaking about his music, and composing in general. I could have just said, “Please talk about music. Go!” and stayed quiet myself, but I impertinently interrupted with a few questions! Click Mr. Readmore to witness the poetry in motion!

MMN: Tell me about how you approached the idea of a concerto, which has such a long history associated with it.

HB: Well, [WGBH’s Brian Bell] just asked me, how did I come to have a commission, and did they say what they wanted you to write? They didn’t say what they wanted; I think they wanted just a piece for the orchestra. But I decided to do something which was the last thing I ever thought I’d want to do, and the most difficult thing I could think of doing, in a period in my life when I thought I would never write a violin concerto. Then that becomes a sort of neurosis in the sense that, “I must never do that.” That’s the reason why I did it – it’s the most difficult thing I could think of.

MMN: So you wanted the challenge!

MMN: What was it like? How did you solve the problems that you saw in it?

HB: Well, to begin with, the technical problem that I had to face was, how do you write a piece for an orchestra and a solo violin so that you hear every note, and where the orchestra is not just reduced to a sort of background, or a pianissimo passenger? How do you do it?

All solutions to dreams, in the end, are technical ones. Because all ideas are good; they’re all equal. It all depends how you realize the dream. That is the most important thing. And I think that I’ve sort of done it. I don’t know what you think, but I can hear every note he plays.

MMN: I could! I could hear everything. I’m a composer myself, so I’m always thinking of it in terms of, how do you do that technically? One solution is that the violin is resting while the orchestra is doing something big.

HB: That’s the obvious idea, like guitar concertos – you hear this thing and then, pow!

MMN: You did that at some points, but not everywhere.

HB: The piece turned out to be a dialogue with the orchestra. Think of the concept of the orchestra being like a chorus. The nature of the chorus, even if they’re not singing in unison, there are individuals with individual points of view, but they’re all singing from the same hymn sheet. So there is that aspect; there is what you might call instrumental role-playing.

They are voices which are independent, and in some cases are at the same time as the violin. They’re not in opposition. The piece is not meant to be antagonistic. Sometimes, to carry the analogy further, there are points of view which contradict or question, and there are sudden changes of tempo and dynamic. That wasn’t there at the beginning; that sort of happened in the process of writing it.

MMN: I was very struck by the ending – it gets very quiet, and then the violin has the last word with a pizzicato note.

HB: The ending is an attempt to avoid the cliché of the quiet coda, but it is a quiet coda. But it introduces elements which have not been before. My intention was to make it seem as if it was moving into the next piece of music – looking forward to something else. So it introduces these sort of clickings and things, like something beginning, something being born more than something dying.

MMN: The first piece of yours that I heard was Carmen Arcadiae Mechanicae Perpetuum, which I was delighted by, because to me it had this sense of a slightly broken machine, or a clock that’s not quite right.

HB: Yeah, that’s what it is – fractured ostinati. In a way, [the Violin Concerto] is full of that. There’s a lot of that in what you could call the continuum – the underbelly of the piece, which sort of drives it forward. Within it, there are broken pulses and broken ostinati, and certain things happen which are random in a way, because of the other process that’s underneath. There’s a sort of serendipity between certain things that happen. You know, it might be a loud click. It’s like a cough in a concert.

MMN: When you are composing, do you compose chunks and cut them together, or do you just go from left to right?

HB: Carmen Arcadiae had a very long schemata of different sorts of music. I found out quite early that with any precompositional schemata, as soon as I get into it, I get terribly bored with it by the time I’ve got 200 yards down the road. The context which you’ve invented becomes more potent than something that you’ve preconceived, because it has a truth, and it sort of looks forward. Carmen Arcadiae is the most radical piece I wrote in that respect. The schemata that I wrote, I just looked at it, looked at the map, and took a section out of the middle – and that’s the piece. It had to be that.

MMN: Do you think that creating that schemata in the first place is important to do, so that you have something to launch from?

MMN: Or do you ever just start intuitively without doing that?

HB: Absolutely. I did with this concerto.

MMN: And then do you ever reach a point where you get stuck, and you have to figure out some way of going forward?

MMN: What do you do in that situation?

HB: Get up and leave it! There’s another funny occasion – it’s happened to me so many times, when there is a real problem in something about what you do next. As soon as I find the solution to it, I get up and walk away from it.

MMN: So that you don’t just keep struggling with it?

MMN: You’ve said elsewhere that you tried using set theory, and it gave you something very rational to work with, but you were more interested in the irrational part of things.

HB: Yeah, the irrational in the sense that you can justify every note in set theory. I could make a chord I liked, which I couldn’t justify, but then I found that by subjecting it to treatment and analysis, I could make more of them.

MMN: Do you find you have to reinvent the wheel with each piece, or do you have processes that carry over from one to the next?

HB: Well, they evolve, and they don’t mean the same thing. If I felt that I was doing something by which I was simply repeating myself, I’d be very worried about it, just to get me out of a spot. And the funny thing about spots and difficulties – there’s a moment in this piece that took me a long time to sort it out, and I was never happy with it, but you wouldn’t know it was there when you come across it. You wouldn’t think, “Oh, he must have had a bit of a problem there.”

And now I’m very pleased. But I remember spending a lot of time trying to make it happen. It’s the cliché, always, that worries me, I think.

MMN: You once appeared on Desert Island Discs on the BBC, and I think your list of recordings is the only place where Frankie Valli appears in close proximity to Stravinsky and Stockhausen.

HB: I’ll tell you, I thought I was dying, literally, when I did that.

MMN: So it really was a desert island kind of situation!

HB: I used to be on the board of the South Bank [Centre], and rather nicely, they used to put us up in the Savoy, in the Strand – very grand. I remember being there, and they sent a car for me. I’d had a [medical] investigation, and I got this note to say that this investigation was not to my advantage. And I went off thinking, this is what it’s like, the beginning of the end. But then later they told me they had been mistaken!

MMN: Would you still list “Sherry” as your top track?

HB: Well, that was sort of a joke!

For more conversation with Sir Harrison, check out Backstage with Brian Bell at WGBH All Classical!