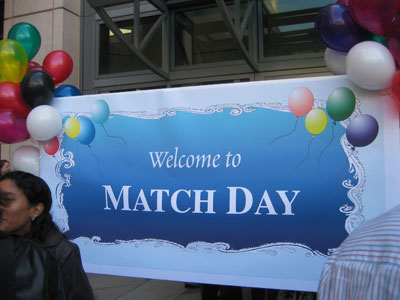 I have a little tradition here at Music Nerd Central: every year around this time, I bring you a list of medical-themed songs. What is it about the Ides of March that calls for such a theme, you ask? Well, gather ’round and let me tell you a little story!

Six years ago, on a cool and cloudy day in Irvine, California, I accompanied McDoc, then a fourth-year medical student, to his Match Day Ceremony. Every year in mid-March, soon-to-be MDs across the country find out where they’ll be doing their residency training. And many schools hold a ceremony where students can open their magic envelope and announce their assignment in front of gathered classmates, family and friends. Because med school isn’t stressful enough without a little public humiliation thrown in!

When McDoc’s turn came, he strode to the mic and cheerfully announced that he had matched to the Emergency Medicine program at Detroit Receiving Hospital — his first choice, the expressions on the faces of those Southern California kids was quite a sight to behold; the concept of someone moving to Detroit on purpose did not compute for them.

Well, it turns out that Emergency Medicine did not actually match McDoc, so two years later, he found a position in Physical Medicine and Rehabilitation, and we moved to Boston. I don’t regret our time in Detroit, but I loved Boston like Jesus loves sinners. We spent three wonderful years there, then after McDoc has finished his residency last June (hallelujah!), he entered a fellowship program here in Pittsburgh. He promises me that he’ll get a real doctor job after this… Our adventure continues!

Anyway, fourth-year med students all over are breathing a sigh of relief today, for even if they didn’t get their first choice of residency assignments, at least the nerve-wracking wait is over. Oh, just wait til you start your intern year, kiddoes — you don’t know from stress!

New residents have only limited medical licenses, but they can write you one of these:
Iko-Iko – Prescription for The Blues

Don’t get too attached to your doctor — you might get sick!
Robert Palmer – Bad Case Of Lovin’ You (Doctor, Doctor)

Knowing when to seek medical attention is important:
Ray Charles I Don’t Need No Doctor

Your turn, music nerds — What music cures what ails you?