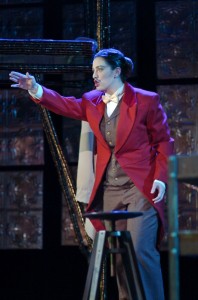 McDoc and I attended a fabulous opera premiere on Thursday night: Light and Power, with music by Isaac Schankler and libretto by Jillian Burcar, produced by the Juventas New Music Ensemble. I previewed it as part of my brand-new columnist beat on The Morton Report, and I hope you won’t mind, music nerds, if I quote myself:

When you hear the word “opera,” do you picture a high-class affair in an ornate hall, attended by blue-haired ladies wearing furs, and featuring doomed lovers bellowing in a language you don’t understand, backed up by a chorus of soldiers carrying spears, and maybe a horse or two? You’re probably not alone, but you should know that today’s opera world reaches well beyond that stuffy old stereotype, from re-imagined versions of traditional repertory to freshly composed works by living composers. In one case, at least, opera can be downright electrifying!

Follow this link for the rest of the back story!

The production took place in a small hall at the Cambridge, Mass YMCA, and for a moment after I first sat down, I had the sensation of being back in high school, where I was a serious theater nerd. There was nothing amateurish about this production, though. Constumes were period-perfect, the singing was rock-solid, and sets and lighting were spare but inventive. It’s always fascinating to see how little you actually need to convey the drama of a story. 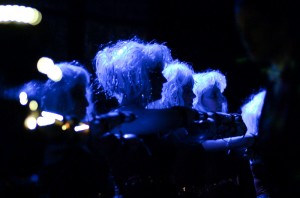 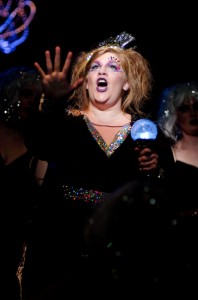 The music was a mix of ragtime and lyrical modernism, as the action alternated between depicting events in Tesla’s life: his rivalry with a young Henry Ford, his personal and professional conflicts with Thomas Edison, and his partnership with George Westinghouse; and out-of-time imaginings as Tesla interacts with Nova, a mythical being who serves as a sort of spiritual guide. The Chorus of Bees, costumed like a girl group from outer space, provided commentary on the action, often with a disjointed, stuttering/hocketing delivery that helped to convey the dreamlike state Tesla felt more at home in than so-called reality. 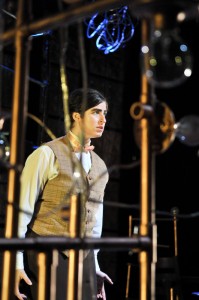 Tesla and Ford are both “pants roles,” portrayed by sopranos, a choice that lent a special poignancy to the rivalry between them, particularly in a scene where Ford and Edison gang up on Tesla in a way that becomes briefly physical. 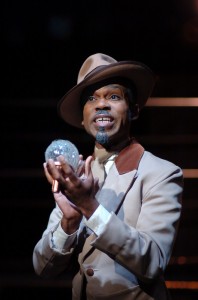 It was fascinating to see Thomas Edison portrayed as a villain and a bully, (though he’s not completely unredeemed by the end) and Davron S. Monroe’s portrayal of him was wickedly delightful. After the production was over, we learned that he’s definitely not a villain in real life though — we happened to be taking the same train home, and he was kind enough to speak with me during the ride. He has a background in both opera and music theater, which served him well in this production. He also works for Opera Boston bringing classical music enrichment to inner city students.

The one drawback of the experience was one that is a perennial problem with vocal music: I couldn’t understand the words as well as I wanted to, and the instrumental music overbalanced the singers at times. But regardless, I urge anyone who is in the Boston area to get to this show – there are performances tonight and tomorrow – and find out just how exciting a new opera can be!