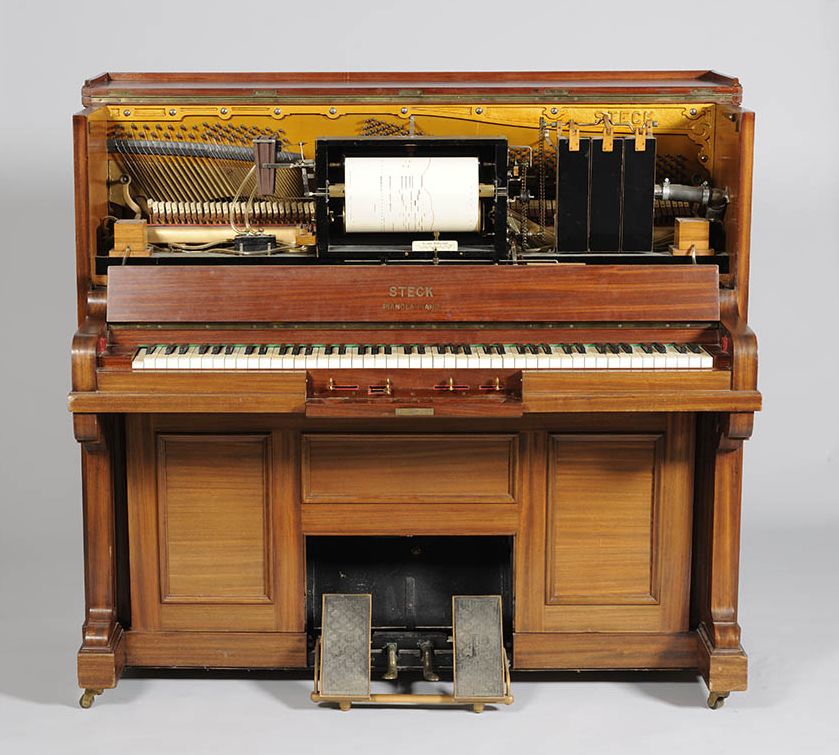 Ten years ago I wrote:

I wanted to write something simple, just chords that change slowly. So I started with a 4-note chord and repeated it, then started changing one note at a time on successive repeats. It’s kind of like the word game where you change one letter at a time to create a new word. It’s also kind of like a chain letter… or a game of telephone… Simplicity is productive sometimes! 🙂

Ah, simplicity. It would be more productive if it weren’t so elusive. Life was pretty simple for me while I was doing this project. Now… not so much! The reasons for that are both positive and negative (see my theory of everything). One of the positives: I’m writing a book! That’s one reason I haven’t been blogging much lately; I’m under orders from my writing coach not to post the whole book online.

My book-in-progress is a collection of humorous memoirs from my musical adventures. Here’s one that explains my preference for cozy creative spaces:

The Piano In Its Natural Habitat, Part Two: The Practice Rooms

When I think back to my undergrad days, one of the first images that comes to mind is not some scenic part of the Berkeley campus, or the concert hall, or any of the various dorm rooms, apartments, or houses I lived in. Instead, I think of a place deep in the bowels of the music department building: a curious network of musical catacombs known as the practice rooms.

There were forty-some-odd rooms, most of them the size of a janitor’s closet: just big enough for an upright piano and a tiny writing table with a laminated wood top reminiscent of elementary school. The doors to the rooms had small, square windows in them, but most of them had been covered using a sheet of paper and scotch tape.

A few special rooms were large enough to accommodate a grand piano, or even two. If you’re serious about being a classical pianist, you have to get your hands on a grand at least occasionally. The practice room grands were old and clunky, but they gave you the general idea.

The quality of the pianos varied widely, and competition for the better ones was often fierce. Access was regulated by an attendant who guarded the entrance from behind a heavy wooden desk with a high counter on the front. Students quickly learned which rooms to request, and which attendants were solicitous about fulfilling those requests. Some were music students themselves, so they understood our plight. In any case, if the person behind the practice desk knew what they were doing, they would give bad piano rooms to non-pianists, who just needed private spaces to play their own instruments.

If you were a pianist, sometimes you had to get pushy. If you stood on tip-toe, you could peek over the top of the counter at the rows of hooks where the room keys hung, then ask for the best available number. (The desk staff just loved that.) They had a system for ranking the pianos, using color-coded stickers and written annotations above each key hook.

Number 61, for example, had a small handwritten sign that read “THE STECK” in scary-looking lettering. Steck was a German piano brand, and I’m sure many of their pianos were just fine, but that particular upright belonged to a category I like to call “piano-shaped objects.” Many of the keys were missing their tops, it had a horribly uneven action, and in a world full of out-of-tune pianos, it really distinguished itself. It belonged in the kind of honky-tonk bar where one corner of the building straddles the line between a wet and a dry county, so the table there is always empty. That piano may very well have been salvaged from the Titanic.

Rooms 21 and 25 had the best upright pianos. 21 was on the other side of the wall from the attendant’s desk, and one time when I was lucky enough to snag it, the keeper of the keys had the nerve to ask me to play quietly so she could read.

Room 57 was special. The piano was of middling quality, but it was the only room with a window to the outside. It wasn’t enough to cure your seasonal affective disorder completely, but every little bit helps.

I loved walking down the two hallways that ran between rows of rooms. The soundproofing was rudimentary at best, and as you walked down the hall, you heard the muffled sounds of dozens of solitary budding musicians leaking out and merging into a marvelous cacophony. Charles Ives couldn’t have done it better.

I practically lived in these rooms during my undergrad years. I used them for more than just piano practice; I also had theory homework that required the use of a keyboard, for plunking through music we had to analyze and testing out my own written exercises. I had to practice the various forms of enhanced musical interrogation our ear-training teachers perpetrated on us: singing one line of a score while playing one or more of the others; singing any interval upon request; sight-singing melodies of ever-increasing difficulty.

When I advanced to upper division courses, I used the practice rooms to puzzle over my orchestration assignments and my counterpoint exercises. And finally, I pulled the little writing desk as close to the piano keyboard as I could get it, so that the score paper I laid on it could catch the blood, sweat and tears I shed while composing.

In contravention of the rules we swore to abide by as a condition of access, we used the rooms for certain activities that weren’t, strictly speaking, musical, or musically necessary. Food and drink were forbidden, but we smuggled them in. There were tearful conversations over heartbreaks and unrequited infatuations. Napping occurred. Mistakes were made.

And if you want to believe the rumors, on more than one occasion, the poor practice desk attendant making the rounds at closing time unwittingly intruded on students practicing the sort of duet you won’t typically see performed on the classical stage.

Even though the rooms were airless and dusty and poorly lit, even though the soundproofing was a joke, and even though the whole establishment was pretty much the equivalent of a music student kennel, I loved it. Each room was a safe haven for me, a place where I could be alone with my music, away from gregarious roommates and intimidating grad students and mystifying professors and all the people I had no clue how to interact with appropriately. Even after I moved to a studio apartment I had all to myself (if you didn’t count the cockroaches,) I still returned most every day to be lovingly swaddled in one of the musty musical closets in the bowels of Morrison Hall.

To this day, I am slightly uncomfortable practicing or composing in a wide open space. I feel exposed, unmoored. My music needs a cozy cocoon to gestate in. Fortunately, obtaining a small, cramped space is rarely a problem for a professional musician.

Photo by Jacques Monnin, from the collection of the Musées de la Haute-Saône, published on Wikimedia Commons as part of a cooperation project with Wikimédia France., CC BY-SA 3.0