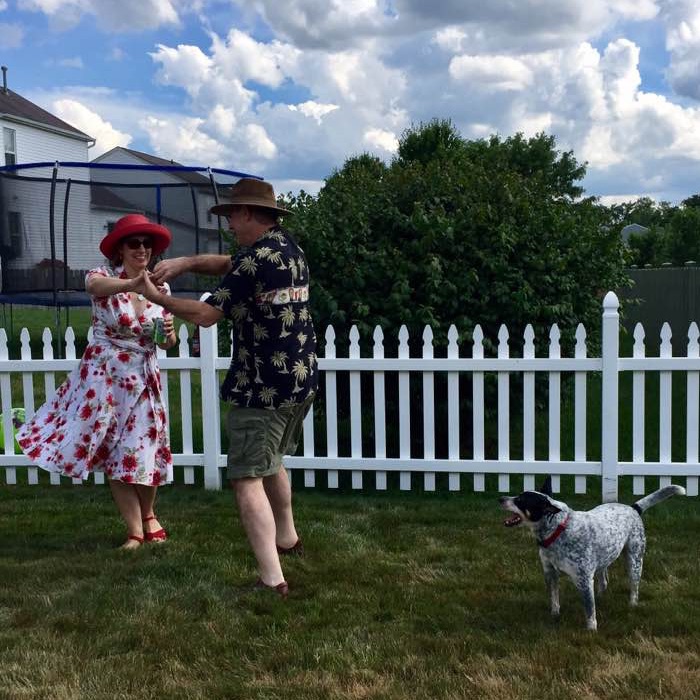 Gather ’round, music nerds, while I tell a tale of musical days gone by!

Once upon a time in 2007, I got the hare-brained idea to write a short piece of music every day for a month and post it online. Today is the 10th anniversary of the day that project launched, and I’ve decided to take a trip down memory lane, one day at a time for the next 30 days. I hope you’ll join me!

Ten years ago today, I sat down to write a piece of music.

It was my husband’s birthday, and I thought a cute little piano piece would make a nice gift. I was glad to have the occasion as a motivator; the preceding few months had been quite a whirlwind, what with planning both a wedding and an out-of-state move while my fiancé finished medical school, and then executing both those plans, starting the day after his graduation. With all the excitement, it had been awhile since I had composed anything.

What came out was a sort of variation on the traditional “Happy Birthday to You” melody, but starting in a minor key and quickly proceeding to wander very far afield.

A favorite compositional pastime of mine is to take a pre-existing melody and do terrible things to it with a fork. Why would anyone want commit such musical vandalism, you might ask? I think it’s a case of two converging influences. Firstly, I grew up singing and playing hymns, and there’s a strong tradition in the sacred piano and organ sphere of writing variations on hymn tunes. The shelves behind the organ in the church where I grew up were stocked with an encyclopedic multi-volume set of “Hymn-tune Preludes” covering every tune in the hymnal — even the ones everyone hated and we never sang. Some of the pieces were pretty out there by Lutheran standards, so they never got played either, but they warped my young, impressionable mind when I ran across them while searching for prelude and postlude selections.

Secondly, in my early compositional training, I was discouraged from employing such musical elements as pretty melodies, recognizable harmonies, or most of the other things that comprise music anyone would want to listen to. So I had to get stealthy.

The results are often barely recognizable, and whether or not that’s a good thing depends on your point of view. In this case, I was pleased with the results, and so was McDoc when I played it for him.

I had so much fun doing this tiny composition project, I decided to write a short piece every day for a month, and post the results online. (Here’s my original announcement about it. Wasn’t I cute?) I had plenty of time on my hands to do it; we had just moved to a new state where we didn’t know anyone except McDoc’s new colleagues. McDoc was working long hours as a first-year resident in emergency medicine, while I was newly unencumbered by employment. And the ability to post pieces on my website and get immediate feedback from far-flung family and friends was gratifying to me. Life changes are stressful, even when they’re positive and chosen joyfully, and McDoc and I had just gone through a jackpot of major life upheavals. I needed something to focus on.

When I realized the 10th anniversary of my piece-a-day-for-a-month project was approaching, I really wanted to do a second round of it to celebrate. But that was a far simpler time, and right now I don’t have the option of clearing my schedule for such a project. Perfectionist that I am, I berated myself about that for a minute. But then I realized there’s more than one way to mark a musical milestone.

And so, starting today, I’m going to look back at the pieces I wrote, and reflect on where McDoc and I have been since then. If, on some days, I manage to write another piece, that’ll be a bonus!