Characteristics of modernism we’ve considered:
– Emphasis on rhythm
– Use of technology
– Music as social commentary and autobiographical expression

These characteristics can be found in other kinds of music that developed in the 20th century as well: Ragtime, Blues & Jazz.

Can you feel the beat in these two examples? Does the melody line up with the beat or go against it?

Syncopation:
– Placement of rhythmic stresses or accents on “offbeats,” “backbeat,” or “weak beats”
– Deliberate disruption of the “normal” pattern of accents
– An essential rhythmic element of many styles of music, especially ragtime and jazz

Billie’s Blues: How is the singer relating to the rhythm here?

Ragtime:
– Gets its name from syncopated, or “ragged” rhythm.
– Mostly written for the piano: the left hand plays a steady beat pattern, and the right hand plays syncopated melodies and chord patterns. 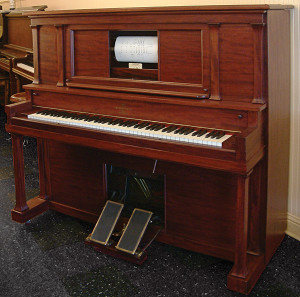 Joplin never made an audio recording, but his playing is preserved on piano rolls for use in mechanical player pianos — an early form of recording technology:

Reproduction of a piano roll of Joplin performing Maple Leaf Rag, with a few stray punches…

Blues:
– Refers to both a style of music and a musical structure that is also used in jazz and rock.
– Grew out of spirituals, work songs, narrative ballads, and other folk music.
– Originated in African-American communities in the “Deep South” of the United States in the 19th century
– “Blue notes:” notes that are bent or flattened for expressive purposes
– If Jazz can be considered “American Classical Music,” Blues could be called “American Folk Music.”

Why might people enjoy singing and playing the blues? As Elton John once said, “Sad songs say so much.”

“The blues takes many forms… It is variously a feeling, a mood, a nameless threat, a person, a lover, a boss man, a mob, and, of course, the Devil himself. It is often experienced as both cause and effect, action and reaction, and it can be used as both hex and counterhex, poison and antidote, pain and relief. Most importantly, the blues is both the cause of song, and song itself…” (Edward Comentale, p. 49. Sweet Air: American Popular Song)

– Where did the name come from? in West African cultures, mourner’s garments were dyed blue to indicate suffering

– Lyrics often follow an AAB pattern: one line that is repeated, followed by a concluding line. This pattern fits with the 12-bar chord progression: typically one line of lyrics per 4 bars of music.

Howlin’ Wolf, “I Asked Her For Water (She Brought Me Gasoline)”

How would you go about writing your own blues lyrics?

Jazz:
– Originated at the beginning of the 20th Century within the African-American communities of the Southern United States.
– Combines elements of African-based music (rhythmic patterns, scales) and European-based music (chord progressions and form)

Your book, p. 278
“Some call jazz the ‘American classical music,’ and there’s no question that the tradition has been associated with the United States for more than a century. The roots of jazz are in West African musical traditions brought to this continent by slaves and developed (sometimes in secret) to both maintain continuity with a lost homeland and provide a creative distraction from hard labor. But jazz was also heavily influenced by Euro-American vernacular traditions.”

Most are examples of musicians who came from working class or poor backgrounds and found success in music — another American innovation!

Duke Ellington: “Take the A Train”

Louis Armstrong, “When the Saints Go Marchin’ In”

Louis Armstrong, 1901-1971
– Nicknamed Satchmo (“satchel-mouth”) or Pops
– Very influential trumpeter and singer from the 1920s to the 1960s
– One of the first jazz musicians to “cross over” and find popularity beyond the jazz community
– Scat singing: did not invent it, but popularized it. Legend: his sheet music fell on the floor during recording, so he replaced the lyrics with nonsense syllables
“Heebie Jeebies”

Ella Fitzgerald, 1917-1996, vocalist
– Like Louis Armstrong, known for her skill at scat singing and her improvisational skills, sometimes including imitating instrumental sounds

How great musicians deal with mistakes onstage:
Mack the Knife: recorded in Berlin, 1960