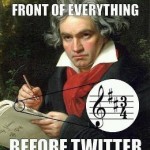 Key point from your textbook, Chapter 27:
“Beethoven’s music is grounded in the Classical tradition but pushes its limits in a way that helped define the emerging Romantic sensibility.”

Beethoven and Politics
“An advocate for democracy and the underprivileged, Beethoven watched with interest as the French general Napoleon Bonaparte rose to power after the French Revolution (1789–99). At first, he greatly admired Napoleon: his Third Symphony (Eroica) was originally called Bonaparte, but when the ruler declared himself emperor in 1804, Beethoven tore up the title page bearing the dedication.

After removing that title, he called the symphony Eroica — “heroic.”

He could be a bit stubborn and obsessive — remember that little motive from the 5th Symphony? It doesn’t only appear at the beginning…
5th Symphony, 2nd movement

At around 1:00 and around 6:00, a familiar motive appears in a different form…

“Everything will be alright in the end… so if its not alright, it is not yet the end!” 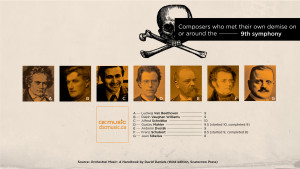 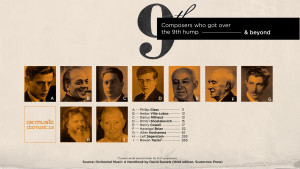 Beethoven has permeated popular culture as THE archetype of the GREAT COMPOSER.

Another example of Beethoven’s enduring influence: