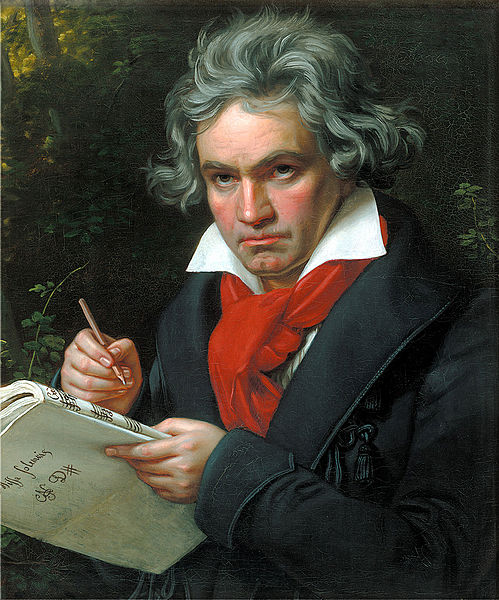 – Transitional figure between the Classical and Romantic eras
– Wrote 9 symphonies, 5 piano concertos, 32 piano sonatas, and 16 string quartets, as well as concertos for other instruments, other chamber works, choral works, and one opera.
– Like Mozart, was a child prodigy as a pianist, and gave his first public performance at age seven. Father was first piano teacher and encouraged/exploited him as child prodigy.
– Began studying composition at age 9, first publication at age 12
– 1787: Beethoven traveled to Vienna in the hope of studying with Mozart, but had to return home due to his mother’s illness and death. It is uncertain whether Mozart and Beethoven ever met.
– 1792: Moved to Vienna and studied with Haydn, Salieri and others. Established himself as a composer and pianist. Received financial support from various Viennese noblemen; did not have one exclusive patron. Taught piano to a few students. Also earned money by publishing compositions.
– 1796: Beethoven began to lose his hearing; suffered from tinnitus (ringing in the ears)
– 1802: Heiligenstadt Testament: a letter to his brothers which records his thoughts of suicide due to his growing deafness and records his resolution to continue living for and through his art.

If I approach near to people a hot terror seizes upon me, a fear that I may be subjected to the dangerof letting my condition be observed. Thus it has been during the last year which I have spent in the country, commanded by my intelligent physician to spare my hearing as much as possible, and this almost meeting my present natural disposition, although I sometimes ran counter to it, yielding to my inclination for society. But what a humiliation for me when someone stood beside me and heard a flute in the distance, and I heard nothing, or someone standing next to me heard a flute in the distance and I heard nothing, or someone heard the shepherd singing, and again I heard nothing. Such incidents brought me to the verge of despair; a little more, and I would have put an end to my life — only art it was that withheld me back. Ah, it seemed impossible to leave the world until I produced all that I felt called upon to produce. And so, I endured this wretched existence — truly wretched. An excitable body, which a sudden change can throw from the best into the worst state. Patience, it is said, I must now choose for my guide, and I have done so. I hope my determination will remain firm to endure until it pleases the inexorable Parcae to break the thread. Perhaps I shall get better, perhaps not; I am prepared.

Joy, beautiful spark of divinity,
Daughter from Elysium,
We enter, burning with fervour,
heavenly being, your sanctuary!

Your magic brings together
what custom has sternly divided.
All men shall become brothers,
wherever your gentle wings hover.

Another example of Beethoven’s enduring influence: